On $60 million to support defenders and taxes that some do not want - Oleg Krot gave a long interview to dev.ua 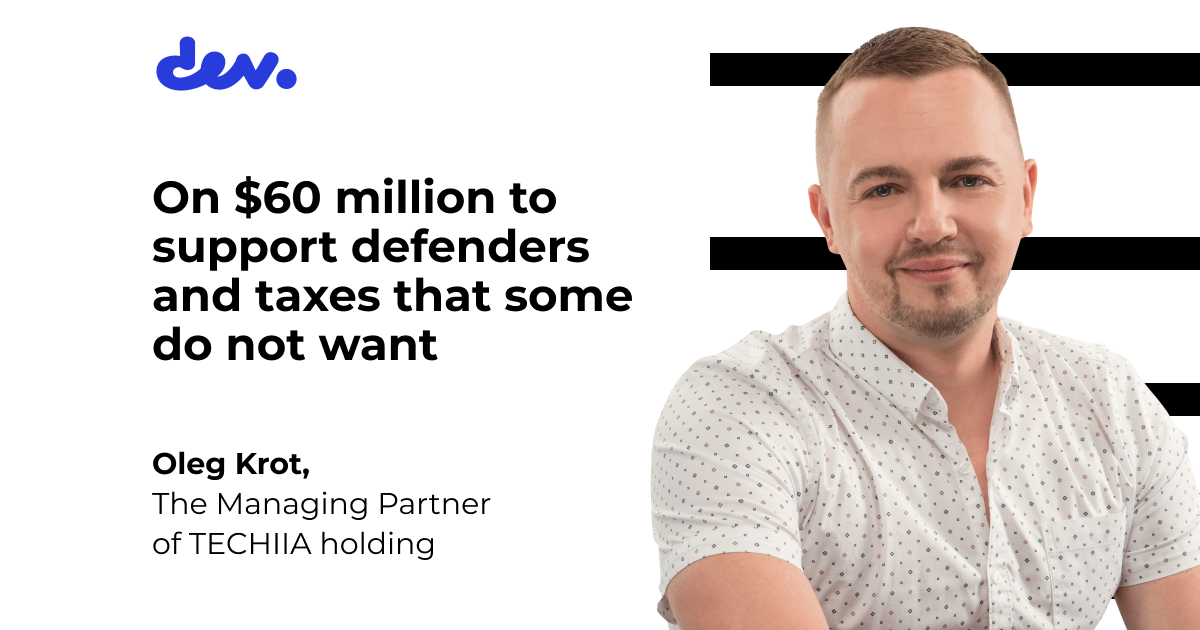 TECHIIA’s co-founder told the IT publication about his attitude to the war and the russians, the finances from which the holding buys humanitarian aid, and the targeted campaign against himself.

Oleg Krot, one of the co-founders of the TECHIIA holding, with dev.ua editor-in-chief Stas Yurasov. The businessman talked about his actions during the active phase of the war, relations with foreign partners, and assistance to Ukraine.

In particular, Oleg explained why the $60 million aid he declared and the total TECHIIA’s revenue for the past year, calculated by Forbes Ukraine journalists, almost coincide. According to him, the calculations do not include the accumulated profit of the companies, and reserve funds of the holding.

"The TECHIIA holding is my most important, but not the only business - there are over 50 of them," Oleg Krot added.

He also talked about how companies were leaving the russian market and joint projects with russians and also mentioned the disputes about the values during negotiations.

"The last time, when, at a meeting, we were arguing with European partners, which position is more or less weighted, I simply opened some photos from the places of combat (which won’t let you sleep for days) and threw the phone in the center of the table. And it worked," said Oleg.

Among other things, TECHIIA’s co-founder commented on pieces of news aimed at discrediting him. He explained the attacks as a reaction to his proposals for the government to eliminate corruption and make a transparent taxation system in gambling and betting to leave no choice but to pay taxes.

"There are people who don't want to change today, just because that's how their business works. There are companies that have the right to exist only due to monopoly. And if these monopolies disappear, a free market, competition, and more taxes will appear," said the businessman.

Read about the "bipolar" russians, closing the loopholes through which millions of dollars flow from Ukraine, and partnership through values.