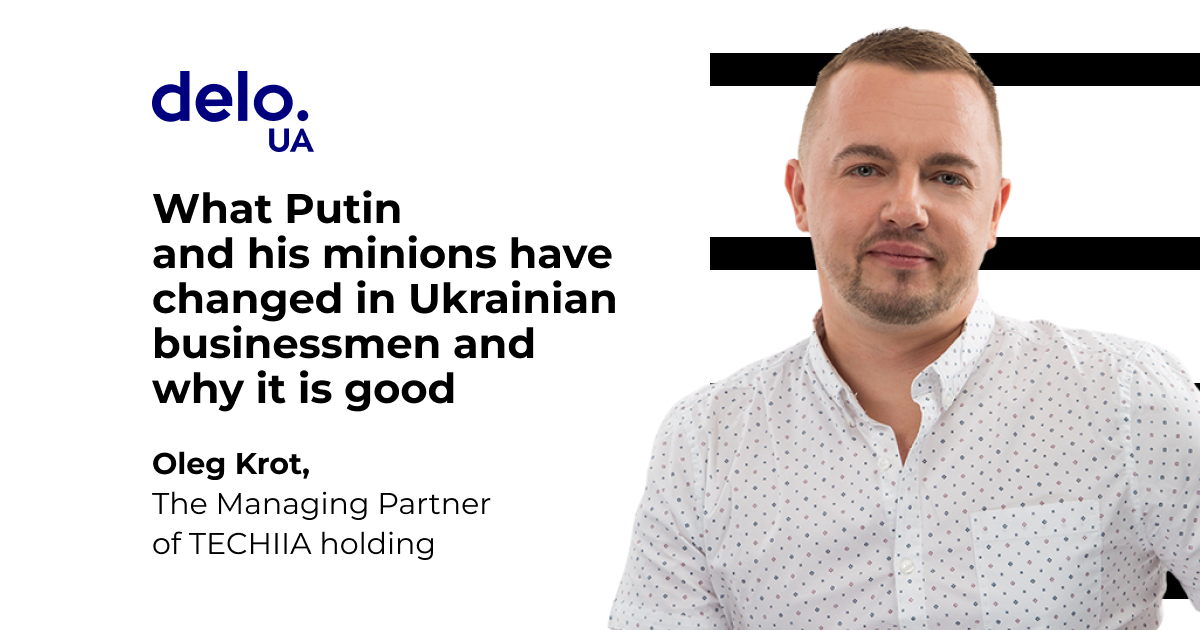 Oleg Krot, the Managing Partner of the international holding TECHIIA for delo.ua.

"Values are like fingerprints," said Elvis Presley, "nobody's are the same, but you leave them all over everything you do."

I'm not a fan of black-and-white assessments of events — everything depends on the perspective and time when these events take place. But I cannot consider russia's full-scale war against Ukraine and the entire civilized world as something positive from any perspective. With only one exception: it became a giant ultraviolet lamp that illuminated the "imprints of values" of countries, companies, and individuals.

If Putin had not started the invasion, businessmen of Ukraine and the whole world would have needed decades to come across the insights we see today. Even 2014 did not become a clear watershed due to the hybrid nature of russian aggression. Currently, we are passing an external value examination. And it leads us to changes I am grateful for. Here’s what I mean.

We are rethinking the importance of philanthropy

Since the first days of the invasion, Ukrainian businessmen have been holding the economic front and giving their all to support the defenders and the civilian population. This is the perfect case when a moral call is firmly in tune with logic: if you don't support your country today, you won't have anyone or anything to work with tomorrow.

Supporting the country coincides with the principles of strategic philanthropy, which civilized business has been practicing for a long time now. Modern entrepreneurs do not measure achievements only by profits and created companies. They consider their consumers as shareholders in the business process. Success is impossible without a paying audience. Subsequently, society must live well enough to consume products and services.

What should a business do in this case? Implement strategic social projects in the territories where it operates. Society raises the standard of living and sooner or later (later rather than sooner) generates more consumers for a business. Strategic ones can include educational initiatives or assistance to the health care system. Decisions can be quick or long-term, depending on how many years or decades the business is looking ahead.

For example, theoretically, we can spend the same budget to send 20 children to Germany or Israel for surgery or to set up a modern surgery in the region to help talented doctors help children right here. The same thing is with education: we can get the brain-drain by sending students elsewhere or we can create educational programs or entire institutions of a modern format in Ukraine.

The key thing is that the usual "contribution-benefit" marketing approach does not work in social initiatives. Businesses invest in well-being often blindly and because of their values, not understanding when and how a good deed might benefit them back. And whether it will benefit them at all. They simply invest, because it is a social norm, a form of gratitude to the places and people with whom the company grew up and in which community it develops.

Unfortunately, it was only because of the war that we understood so deeply the importance of systemic support for the army and society. At the same time, war acts as an ideal motivator to develop the habit of helping, which will stay with us after victory.

We obtained a clear criterion for choosing business partners

The russian invasion gave a simple criterion for choosing a partner: you either help Ukraine to protect its freedom, or you don't. In the first case, we are basically on the same side, we have at least one huge common interest, thanks to which we will understand each other. If that’s the second case - I'm sorry, we won't talk before Ukraine wins.

Remarkably, this principle works not only in Ukraine. I remember during negotiations back in January and February the businessmen of Central and Northern Europe were worried, but doubted that Putin would attack. Europeans are very dependent on the russian federation, not only because of hydrocarbons but russia was also an interesting sales market for many companies. Therefore, they found many excuses for Putin, although it would seem that the Second World War should have taught everyone that after crossing a certain red line, the appeasement policy does not work.

However, the invasion began to put everything in its proper place. In the first weeks after February 24, I put business matters aside and immersed myself in setting up the humanitarian aid system. The lion's share of time was and still is spent on negotiations with foreign partners. Fortunately, most of them supported Ukraine in every way possible. And this makes sense: if we share different values, we can’t be trustworthy partners.

Of course, there were some surprises. One investor, who repeatedly considered joint projects with our holding and wished Ukraine all the best, called in the first days of the invasion and canceled all plans, saying — the risks are too high, sorry, nothing personal. And just vanished. Then I realized that his previous support was only lip service. But now this approach no longer works. If a foreigner wants to do business in Ukraine, it is necessary to support Ukraine as much as possible and in any way possible — otherwise, this market may simply cease to exist.

Experience in business has taught me that you can expect anything from people. But if you unite individuals with a similar value foundation, it is not so important if one of them does not pass the crisis test. The vast majority will stay.

We are getting a chance for fundamental changes

I have always loved Ukraine for its people, but I did not love it as a state. Finally, starting in 2014, the war has slowly but surely been changing officials’ minds. They started to understand how the draining of money from enterprises leads to the collapse of statehood. The generation of oligarchs is passing away, and there are people in power with whom it is possible to conduct a dialogue regarding the healthy development of the business environment.

As a result, we entrepreneurs feel more influence and responsibility. If we talk about TECHIIA, earlier we were thinking about how to make more American businesses, and now — how to increase the amount of investment in the Ukrainian segment. I hear similar things from other big Ukrainian entrepreneurs.

There are several reasons for that. First, if you leave the country and the people, realizing that you could significantly improve their lives, you might lose self-respect. What does increasing investment in Ukraine mean for our holding? Time and money. It's a small price to pay to be human.

The second reason is purely business. The experience gained by Ukrainian businesses in attracting aid to Ukraine should not disappear in vain. We have to think about what will happen after the victory. Not only to invent new ways to ask for money, but also to create infrastructure, raise the economy, and bring partners to the country.

Understanding this, we in the holding are adding new directions — for example, financial and construction technologies. Also, our team has developed several business processes that will seriously increase budget revenues. At first, it will be hundreds of millions of dollars a year, then billions. But this requires changes in the tax system, and in the mechanisms of doing business so that foreign companies could come (back) to Ukraine and pay taxes here.

Nobody needs a weak, poor, and corrupt country. Nobody owes us anything, and it will be more difficult to put pressure on the sense of moral debt, the more the war will be on the screens and front pages of the world mass media. Only a strong partner will be given respect and help. But no one will help someone who steals from himself.

The future of the country depends on how effectively the Ukrainian government will be able to interact with businesses — domestic and foreign. For this, officials will have to change and create conditions for fair competition and transparency. I have no illusions: the war will not wipe out our "peculiarities" completely. But it will significantly affect the improvement of the business climate.

Also, I do not believe that officials will suddenly start to propagate super values. No, we will have to work with them by methods of explanations and pressure, demanding that thieves who interfere with work disappear. It seems to me that now is the moment. I don't know whether such changes are enough to become a prosperous state. But we believe and we work.

最新的新闻
TECHIIA won the ranking of social initiatives in Ukraine
The "Get well soon!" project for upgrading equipment in hospitals became one of the winners of the "Responsible Country" contest in the category "Own Projects of Charitable Foundations" from Marketing Media Review.
SENET became a partner of CyberCore, the largest franchisor in the cyber club market of Vietnam
Premium locations of the largest network of cyber clubs in Vietnam – CyberCore – have chosen SENET from ENESTECH as a software platform for managing clubs. This is the start of a great partnership, as CyberCore has over 700 clubs across the country.
In 2022, 9 hospitals received new equipment from the Techiia Foundation
During the year, children's and adult hospitals of various directions in seven cities of Ukraine received new modern medical equipment and consumables worth over UAH 6.5 million.