Surviving the Wild: Increasing Your Startup's Chances of Success 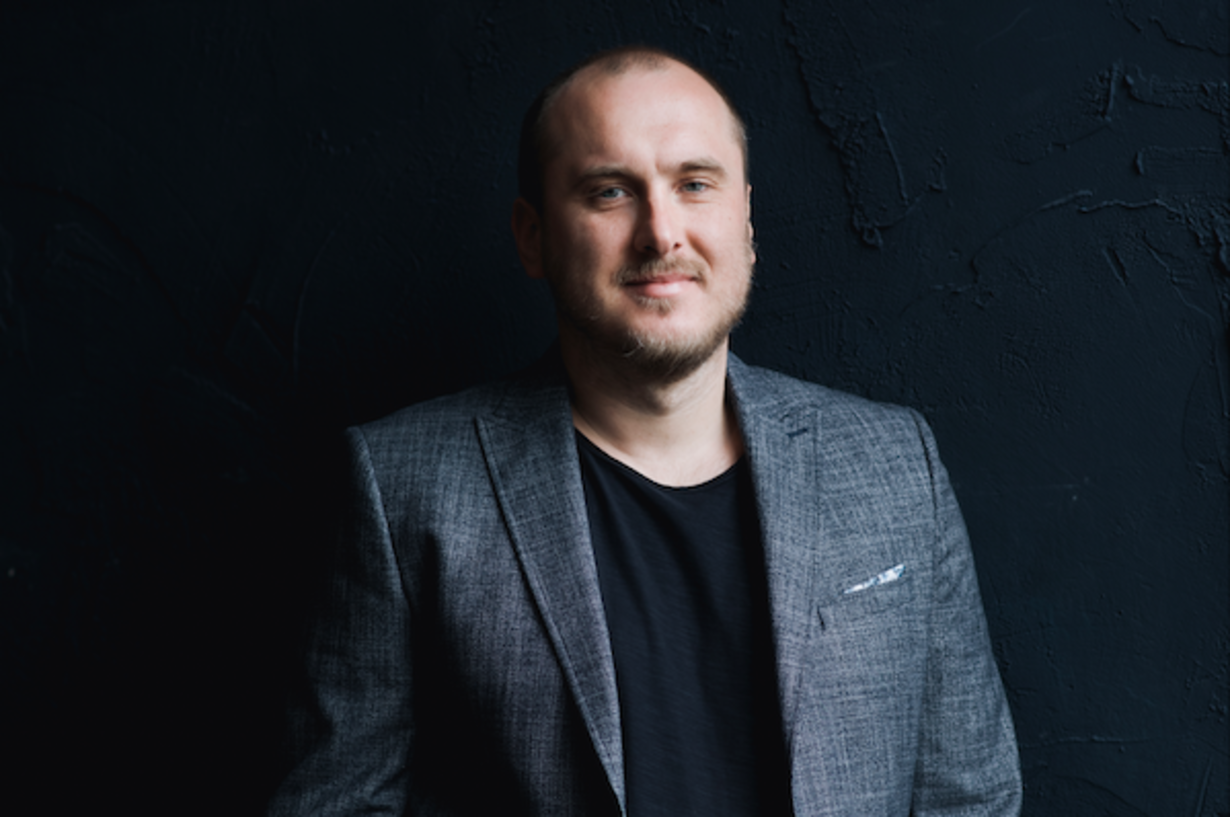 Alexander Davydenko, the Managing Director of VRTX Lab, TECHIIA’s venture studio, on the reasons for the low survival rate of startups, the "valley of death" and new models of venture investment.

99% of salmon larvae die before they move from fresh rivers to the ocean. With startups, it's about the same story: only one out of ten survives. And only 1 in 100 grows to a large and beautiful "unicorn". This happens because young projects that have jumped into the business ocean are simply not familiar with survival strategies in a hostile environment. 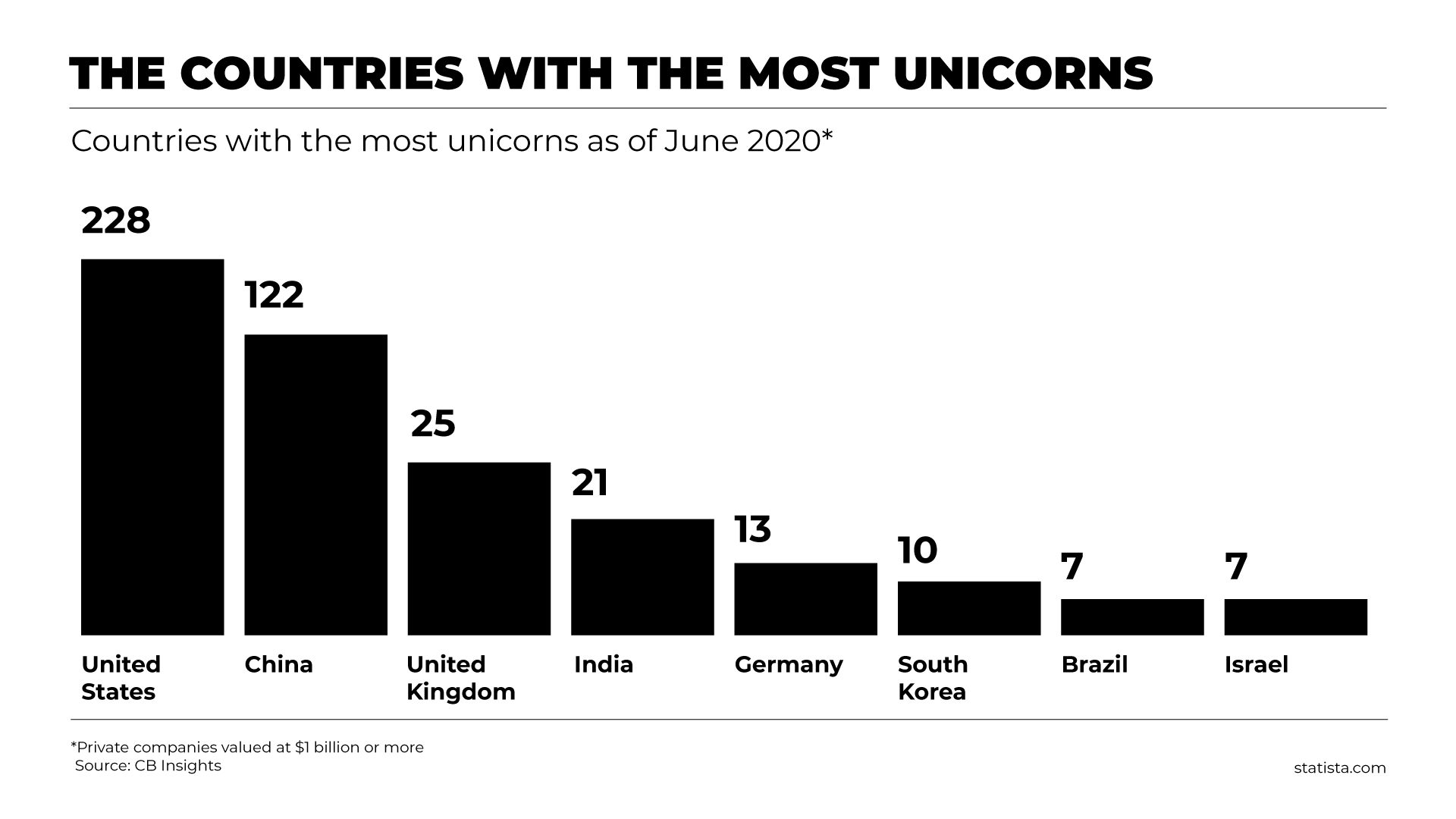 I often raise these topics with aspiring founders at meetings, conferences, and development programs. Unfortunately, such events allow discussing only superficial problems, but not delving into ways of solving them.

Therefore, I decided to write several detailed articles in which I will tell you in detail what prevents cool companies with ambitions from surviving, why the traditional venture approach is becoming obsolete, and how a new project can go through difficult stages. This article focuses on the main issues in the startup industry.

These statistics are gathered in the USA - a country with a huge venture capital ecosystem, a bunch of funds, and a completely different approach to investing. Promising startups can find investments easily. For example, during a seed round in September 2010, the Uber startup raised $1.6 million from three venture capital funds and seven private investors.

We don’t have such numbers in Ukraine yet. Our statistics are better, but only because fewer startups are created and their creators have complete confidence in them. The venture ecosystem lags far behind the western one. Yes, in recent years, new and active funds have emerged, such as GR Capital, SMRK, U. Ventures, Genesis Investments, and others. But they are still not enough to hedge or lend a helping hand to a startup if it needs a round-up or intermediate attraction.

As a result, Ukrainian founders have to calculate everything very accurately, and this, in turn, increases the riskiness of an already risky approach. The slightest miscalculation in the business model or the need for another pivot results in the almost instant death of a startup.

The main causes of the project failure

Numerous studies show that the main reason for failure is insufficient PMF (product-market fit). In simple words, it means that nobody needs the startup’s product or service. 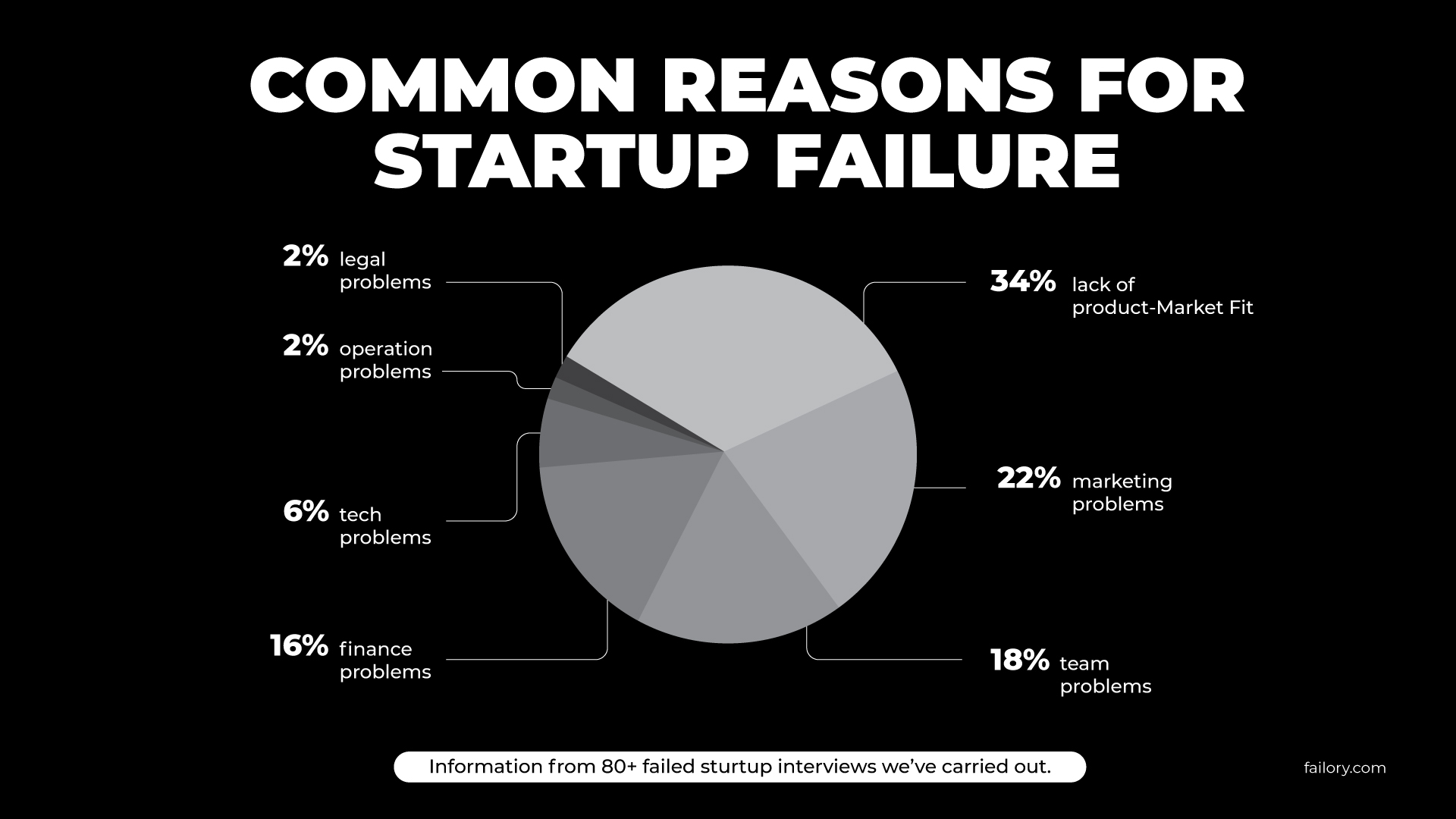 In the mid-2000s, the term was promoted by the American entrepreneur, software engineer, and venture capitalist Marc Andreessen. PMF shows how relevant a product or service is to the market. You can create a revolutionary product, but if there is no demand for it, the project is doomed. The PMF of such a startup will be poor, and for this reason alone, 34% of projects will be closed.

The next reason is marketing problems, due to which 22% of projects fail. This means that even a great product with a great PMF needs smart marketing in order to enter the market at the lowest cost.

Finally, 16% of startups close due to a lack of funding. This happens because most venture capital funds start cooperation with projects only at the late investment stages.

Rounds very rarely fall into the real needs of the company - both in size and, more importantly, in time. Here the crowd effect is triggered by investors: most investment offers come when they are no longer needed.

Venture capitalists want guarantees, and it is quite logical. After all, if the project lasted until the late stages, then it has proved its vitality and viability.

But even this strategy is rarely successful. Only 1% of startups really make it through, turning into unicorns - projects with a capitalization exceeding one billion dollars.

With the help of such projects, funds return costs every five years, and then again incur losses: according to statistics, in 75% of cases, startups with venture capital financing do not bring any profit to the investor. 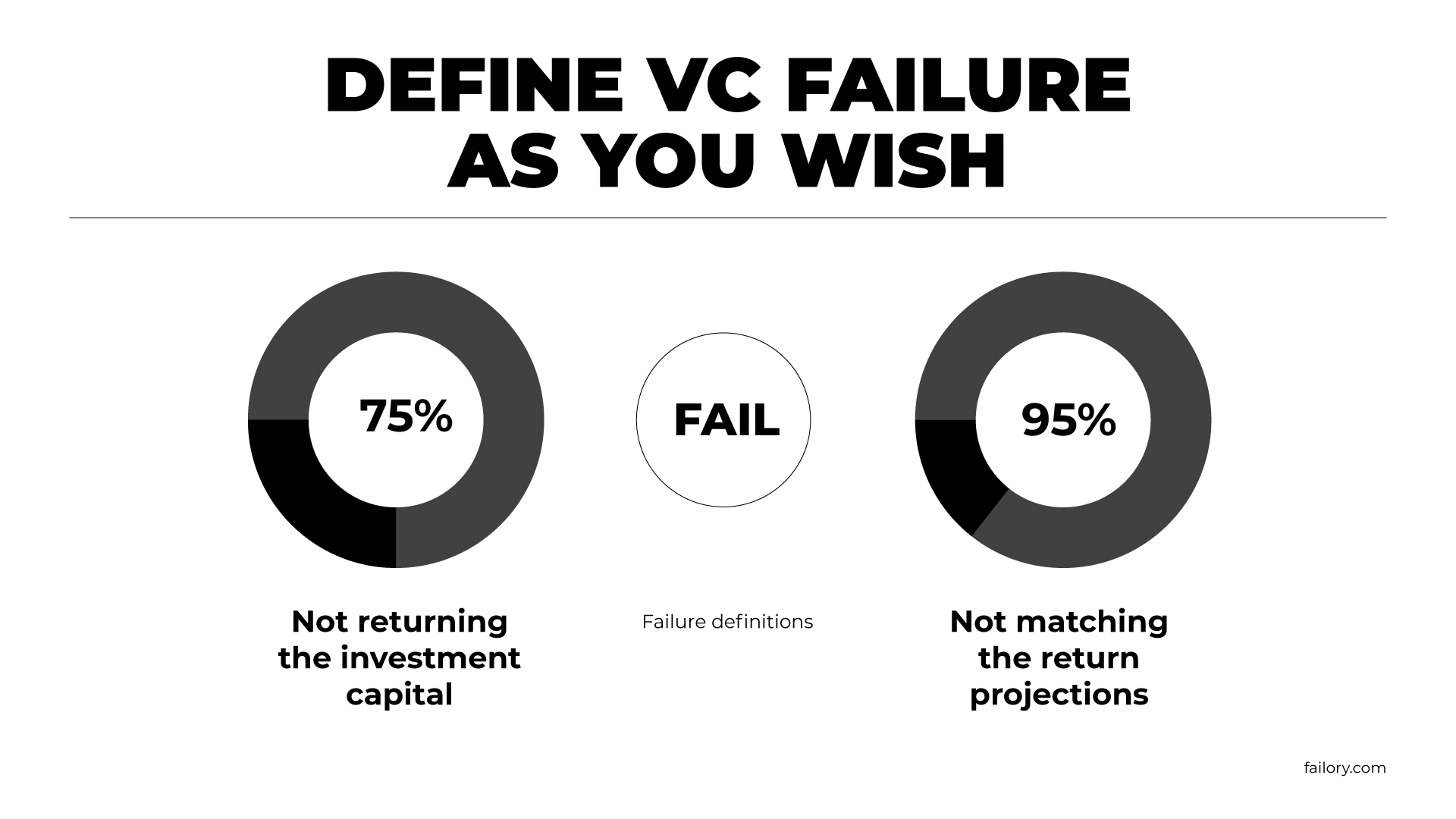 The bottom line is simple: the traditional venture approach is not effective. This is an outdated model, and more and more companies nowadays prefer to use a different way of creating and growing a business.

Why the traditional model doesn't work

The traditional venture capital model was created about 100 years ago in the United States. The essence of this approach is that the investor provides money, guided by the project roadmap. But even if funds can be obtained, most startups still cannot fulfill their plans. And here is why it happens.

1. Investor and founder are not in the same boat

The most difficult thing for a founder is to find an investor who understands the startup’s potential and can benefit from it.

Benefits are, first of all, connections and access to target markets, with which the investor can accelerate the project. Money is not the essential thing here. Many novice founders forget about these priorities: they believe that their project is already powerful enough in itself, and they only need fuel in the form of money.

If the dialogue only revolves around funding, the venture investor pours money into the project and makes sure that the company's development indicators coincide with those specified in the financial model. Founders receive KPIs and reports on how things are going in this project once a quarter. That's all.

Tranches within a round are often linked with KPIs, which also limits the startup's ability to change strategy and adjust to the real market situation. Founders usually receive some obscure pieces of advice with no specifics and no real opportunity for a startup to change something in its approach and strategy.

On the other hand, investors themselves are often limited in what to influence in a startup. This also does not add flexibility to the approach, and options to startups’ survival.

As a result, the essence of the strategy of venture funds and business angels is to invest in as many high-profile projects as possible, inflate the valuation and resell it at a higher price.

2. A startup cannot make it through the Valley of Death.

It usually takes too much time between the last investment round and the startup’s full swing. From two to four years on average. During this period, the founders’ possibilities are limited: according to the terms of agreements with funds, they cannot spend money under the influence of changed circumstances, competitors’ actions, market conditions, etc. In such a situation, a startup simply cannot evolve effectively.

Most startups shut down just around the time they enter the Valley of Death. 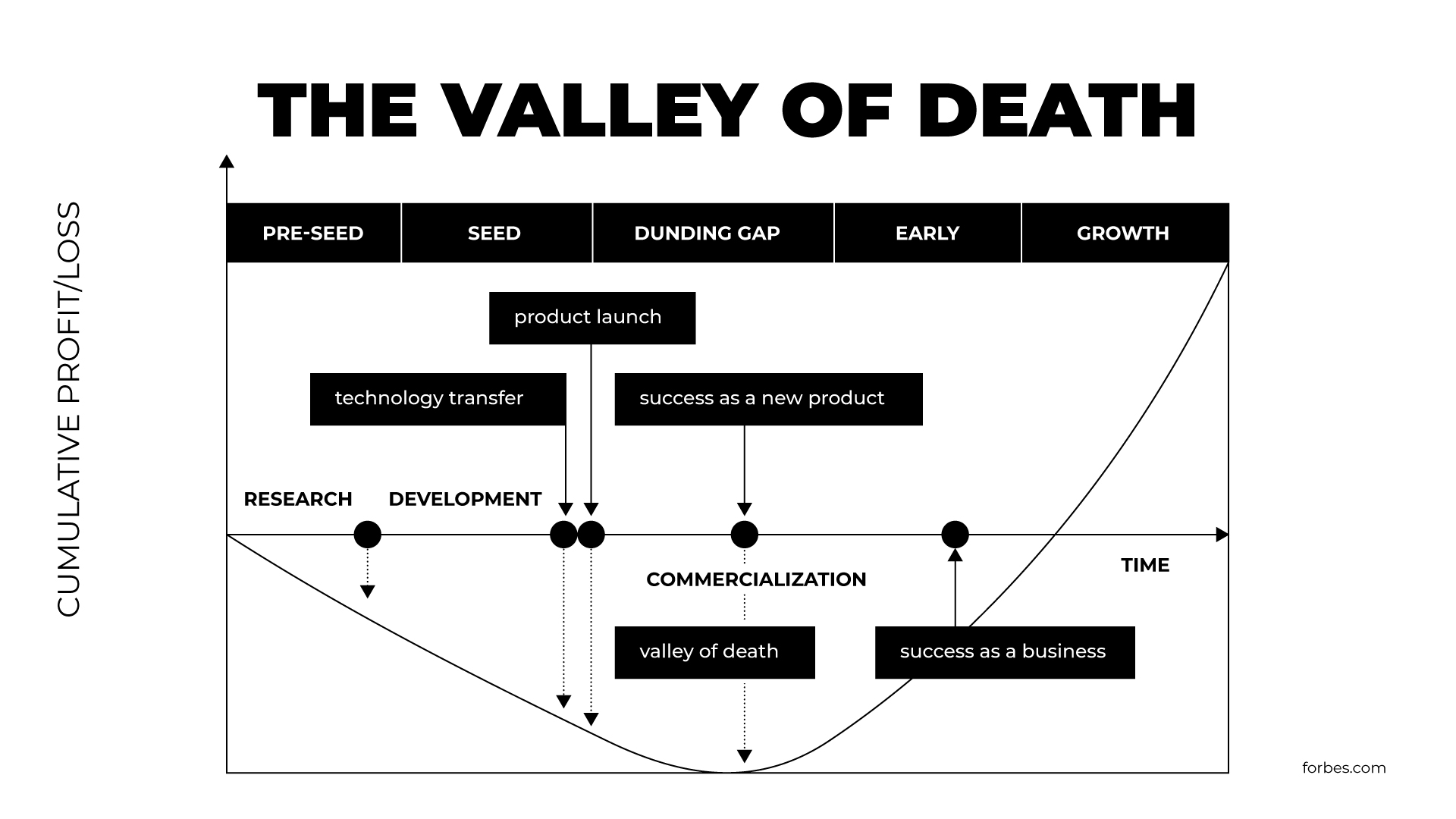 The Valley of Death curve is part of the graph describing the period when a startup is launched but has not yet started making a profit. During this period, the company exhausts the initial capital provided by the shareholders and is gradually blown away: the product is just being finalized, but the funds are no longer there.

With the traditional approach to venture funding, the chance that a startup will be able to get out of the valley of death is very small. Not because the project offers a bad idea. The round investment approach does not take into account the uncertainty of the startup environment. It implies that the founders are visionaries who predict the future and/or can themselves make adjustments needed. But the reality, just like the market, is different.

An alternative to venture funds

Over time, the venture capital market has faced a gap. In the early stages, a startup can be supported either by angel investors with small investments or by a little more money from funds that are focused on beginners. But they devote little time and attention to the startup.

At the other extreme are late-stage investors. They invest significantly more money and time. But, as we previously figured out, only a few startups reach this stage.

In such conditions, a new option was born - venture studios. They are also called venture builders or startup factories. They act somewhere in between: they bring a project with an ambitious idea to a sustainable business model and final rounds of investment from large funds.

Like a fund, a venture studio has a goal to grow a startup and sell it at a high price. The main difference is attention and support. The studio's processes and approach are set up to automate what can be automated or provide extensive support so that the founders can work on the key tasks of the project - finding and satisfying the client's needs.

The studio staff actively helps in the development process, provides projects with the necessary expertise and infrastructure to resolve issues in:

It can take months for a startup just to figure out how these issues should be resolved.

An important point is that resources are provided within the framework of fairly flexible conditions and many times faster than when raising the next round in a traditional venture. This significantly speeds up the building of basic processes, making decisions on obtaining resources, and even changing the business model. The project wins one of the main market advantages - deployment time.

This approach implies fewer projects, but each of them receives a lot more attention. As a rule, this leads to the fact that the founders have a smaller share than in the traditional venture.

There are several main types of venture capital studios. Some create startups for corporations or other clients. Others work as incubators for similar projects. They all receive approximately the same limited resources. The project that succeeds is released for scaling, and the rest are closed, shifting teams to other areas.

Yet another type of studio operates within a narrow focus. They carefully select projects and give them enough resources, including money, infrastructure, and clients. The teams of such studios constantly interact with each other, and everyone benefits from it. This is exactly the approach we use at VRTX Lab - to create startups for the market opportunities at our discretion.

We have defined our focus, are looking for teams with deep competencies in the areas of interest to us, and give them the resources to achieve ambitious goals. 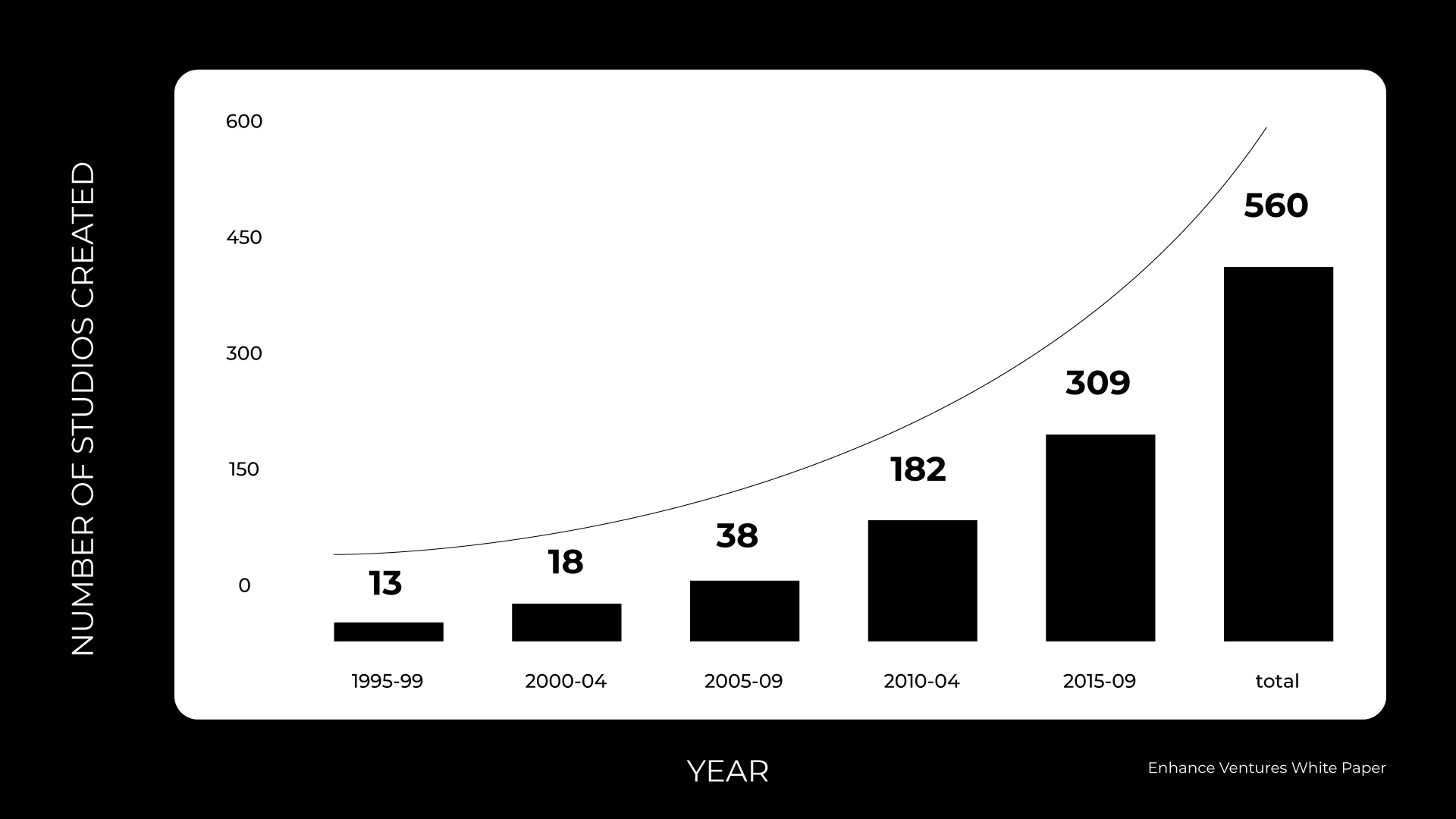 Today, the practice of creating their own venture capital studios has become common for large tech companies. This led to the rapid growth of this investment format: last year there were 560 venture builders in the world. In order to understand how many this is, I will add that since 2013 the number of venture capital studios has increased by 625%.

In the next article, I will tell you about the history of venture capital studios and how they emerged as well as analyze in detail their approaches to interaction with startups.

Últimas noticias
Social initiatives of the TECHIIA holding were presented at the UN General Assembly
On September 21, within the UN General Assembly, the UN Global Compact Network in Ukraine and Poland jointly presented the study "United Business for Ukraine". TECHIIA holding cases are among the most significant ones.
What changes do we expect, demanding judicial reform
Roman Rodin, Chief Legal Officer of the international holding TECHIIA.
Live Commerce technology is now available in Ukraine
Businesses can test it completely free of charge.