What changes do we expect, demanding judicial reform 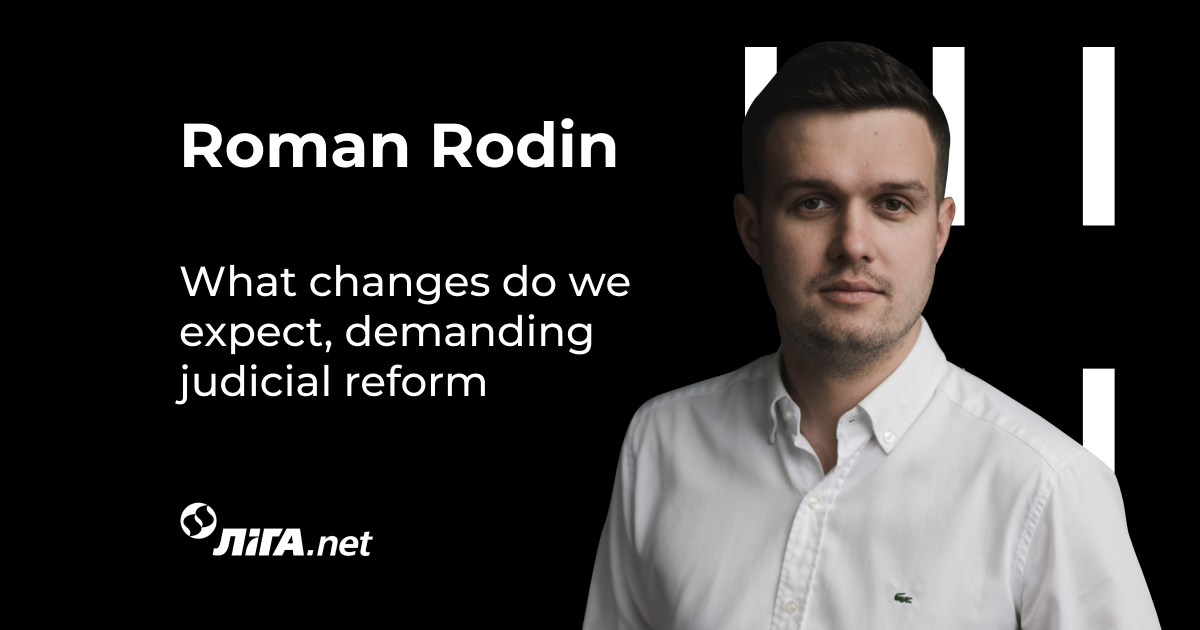 Everybody has been talking about the need for judicial reform for a long time, but now this topic has become extremely hot and timely. Both the European Commission and the G7 insist on changes. How quickly Ukraine will be able to carry out this reform depends, for example, on the status of a candidate for joining the European Union.

But the paradox is that the loudest voices calling for reform do not come from the professional environment: the leading critics of the judicial system have never been legal officers. I hope you don’t mind me adding professional and valuable comments to this argument. Let's analyze the classic dichotomy — expectation, and reality.

The scale of corruption in the courts is exaggerated

The opinion that we have a terrible and ineffective system is most often expressed by participants in court proceedings whose claims were not satisfied.

Usually, the losing party is convinced that the decision was made because of the bribe. Poor plan of the lawyer or a clear loser case - such options are not even considered. However, when analyzing the decisions of the courts of first instance, after which my former clients had suspicions of bribery, I often had to convince them of the opposite.

Yes, we have corrupt judges. But the scale of corruption is not as big as it might seem. A lost case is not necessarily the result of hush money.

Let me give you an example. Being an active participant in the Revolution of Dignity, I remember how my driving license was taken away through the court for participating in Automaidan. At that time, the participants of the protests interpreted these cases unambiguously - as pressure from the authorities on society. But the thing is that the majority of judges issued decisions on the confiscation of driver's licenses based on violations that did take place.

The impossible cannot be expected from judges, even in such situations. A judge acts just like a smart contract, they render a verdict based on the facts. And if you blocked the highway with absolutely good intentions and a desire for European integration, the judge in our legal system simply cannot make another decision.

Illegal court decisions are the exception rather than the rule

The opinion about the extent of corruption in Ukrainian courts has yet another reason — the tradition of suing in any situation. Hiring legal officers and paying court fees are relatively inexpensive in Ukraine. This leads to an influx of people willing to sue over small things. I had a case when a person did not want to negotiate and went to court over UAH 500.

In our country, there is no tradition of mediation — an alternative out-of-court resolution of disputes, which is why many Ukrainians do not understand that a court is the last resort. In the end, citizens develop inflated expectations, and, having lost the case, they think that the judge was definitely bribed.

Most often, the suspicion of corruption arises during the resolution of economic disputes, when the judge simply accepts the arguments of one of the parties. By law, a judge makes a decision based on the Law and internal conviction. So, this belief was sometimes bought, but 8 out of 10 decisions in my practice were valid. The other 20% of cases could be resolved in favor of both parties, and it is not a fact that all of them were due to corruption.

Unfortunately, we have judges who have made outrageous decisions. There are inspections against them, but most continue to work. Why? Because in Ukraine there is a widespread esprit de corps among judges: they do not like to make decisions against their colleagues.

Such cases have a huge public resonance and are perceived as a hallmark of the entire judicial system. And in fact, these are exceptions. However, they are the reason for the negative attitude of society and foreign institutions towards our judicial system.

The Supreme Court has been successfully reformed. Others are next

An attempt at judicial reform was made immediately after the Maidan. In the summer of 2014, a conference of lawyers was held in the capital, where we had to present our vision and proposals. Everyone understood that it was impossible to dismiss more than 5,000 judges and replace them with new ones not corrupted by the system - there was simply nowhere to get them.

Later, the state decided to start the changes from the head — to reform the Supreme Court, after which to reform the courts of appeal and lower courts. There was logic in this decision: the Supreme Court makes the final decisions, and changes in this structure could set the tone for reforms of the entire branch.

In my opinion, the Supreme Court was successfully reformed. A fun fact shows that these reforms are working: in 2019, the judges of the Supreme Court took the exam, and some who worked there for 15 years did not pass it. Instead, my university teacher did pass it and was absolutely honestly elected to the Grand Chamber of the Supreme Court - a gathering of the most experienced judges who consider the most difficult and unusual cases, which lay the ground for judicial practice in the future.

I attended the Grand Chamber after the reform, and it was one of the most impressive experiences of my career. Courts usually seek a simpler, unanimous decision. But during the session, four of the twelve judges expressed different opinions, indicating the possibility of several options for resolving the dispute. This indicates a new, more careful, and comprehensive approach to the consideration of cases.

These events triggered serious changes. Previously, lower courts were perceived simply as stages of dispute resolution. But now everyone is trying to implement the decision as soon as possible because the Supreme Court will not issue an unjust verdict. The strategy of "get to the Supreme Court and decide there" no longer works.

An overall reform is impossible without a change in society

The reformed Supreme Court is only the beginning of major changes in the Ukrainian judicial system. I think it is important to clarify what exactly is hidden under the public demand for judicial reform.

As a participant in the legal market, I would slightly shift the emphasis and speak not about the reform, which involves a fundamental restructuring, but about bringing order.

The main complaint against the third branch of government is the ability to put pressure on judges. It is this, and not the quality of legislation, that causes dissatisfaction. The emotions that inevitably arise when discussing such a high-profile topic do not allow critics to see the whole picture and pay attention to the positive aspects of our judicial system. And there are many of them. For example, speed of decision-making. Not all members of the European Union can boast of such a pace of case consideration as in Ukraine.

In Cyprus, for example, cases are considered for an incredibly long time. Sometimes the processes can last 10 years. That is why many cases are not given to judges of old age, they simply may not make it to render decisions.

All that needs to be done for the proper operation of Ukrainian courts is to get rid of corrupt officials, stop the pressure on the courts, and strengthen control over the rest of the judicial corps. And to change themselves, because everyone wants corruption to disappear, yet still "the man" could "handle" things for them.

Corruption has become a vital organ of our society and removing this organ will lead to unintended consequences. Many simply do not understand how to live in another value paradigm. And judges did not come to us from outer space - they came out of our society. Therefore, as long as the people think in such categories, the judicial system will reciprocate.

Últimas noticias
Motion designer: things they do and where to learn it?
dev.ua continues the series of articles about IT professions. Today Pavlo Rymkevych from the international holding TECHIIA talks about the Motion Designer profession.
What Putin and his minions have changed in Ukrainian businessmen and why it is good
Oleg Krot, the Managing Partner of the international holding TECHIIA for delo.ua.
WePlay Esports has become an official production partner of the Ukrainian-language broadcast of the FIFA World Cup 2022
MEGOGO has become one of the official broadcasters of the 2022 FIFA World Cup. The media service will broadcast all 64 matches of the tournament, 18 of which will be exclusive, with Ukrainian commentary.