Olena Shostak, CEO of JMIND on flagship product Infinite, war swings, and plans for Europe and the USA 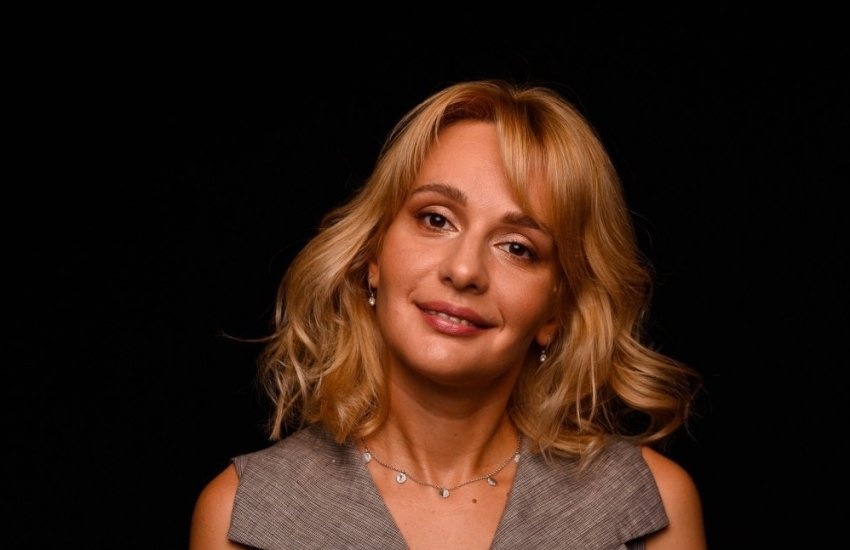 How fast did the company grow before the start of the full-scale invasion? What markets and development areas were a priority? What products of the company were the drivers of its growth?

— JMIND now operates as a product company. At the very beginning, we made several turnkey projects for businesses and foreign partners of the TECHIIA holding, and then we started creating our products.

In the last six months before the invasion, was preparing to launch one of its flagship products - . It is a video streaming platform through which e-commerce platforms can organize live broadcasts with an instant purchase option. It allows you to increase sales and reduce returns.

For starters, we picked several markets where live commerce is not developed, and we could give it a boost. Ukraine was to become a test market, and then we would move to the Gulf countries and Latin America.

The war, of course, "adjusted" these plans. In our home country, we can still do a social promotional project, like Serhiy Prytula's auction, which performs live sales to raise money for the Army. And from the business perspective, we move to other markets.

In parallel, we develop other products, including the Blend Social charity product.

Tell us about the most difficult and best decisions that the company's management had to make since February 24.

— Never give up and never stop. Change strategy and keep working. We could have stopped working with Infinite, but risked entering new markets with war-torn budgets. We could postpone work on Blend Social, but on the contrary, it was quickly converted into an application that helps Ukrainians. It was both the best and the hardest decision.

What has changed in the company’s daily routine? If there was a relocation of employees, in what way did the company help?

— We have become even more united. It doesn't even matter that the team is now scattered around the world, and scattered big time: different cities in Ukraine, Portugal, Croatia, Germany, France, Poland, Indonesia, and Spain. Everyone moved on their own, but we kept in touch and shared useful information. For those in need, TECHIIA holding provided the opportunity to receive a 2-3 month salary in advance.

Do company employees participate in the volunteer movement? Are there those who went to fight at the frontline?

— Two of our employees joined the Armed Forces, and several people joined the Territorial Defense. Other colleagues donate to the Come Back Alive, to the NGO Techiia Foundation. Some are fundraising for protective armor and drones. Those in Ukraine are trying to be useful on the ground - to help bring order to the liberated territories, to donate blood. In the first month, I bought hemostatic and antidotes produced by Darnytsia in Georgia, because we could no longer find them.

It was very difficult in the first month when everyone was trying to get over the initial shock. Everyone did what we could, and as much as we could. And now we work hard.

JMIND is part of the TECHIIA holding. Has anything changed in the company's operation since the beginning of the war? Perhaps some processes have become more complex, or vice versa. Share your experience.

’s companies, like many others, were trined by COVID. Before the invasion, we had been working in hybrid mode for two years. The JMIND office is more of a hub, a meeting place for those who are tired or unable to work from home. All processes are configured online. Therefore, our everyday processes have not changed at all, but have become stronger.

With the start of a full-scale invasion, JMIND quickly launched its "war-time product" - Blend Social - a free application to seek or receive assistance. How did the idea for such an application come about, how many people created it and how much time did it take?

— A few months before the war, we developed the idea of a social network where people could meet and unite according to interests. 15 people were working on the prototype for three months.

In the summer we were planning to make the first launch in several markets. It was to be a large-scale project that we tested in the United States, Brazil, and Ukraine. But Russia's invasion ruined those plans.

We have a product manager Olena, who was in Odessa at that time. Immediately after the attack of the occupiers, she went to Poland, and from there to Germany. Because of the uncertainty of the first days, she was driving into the void and was very worried about whether she would have a place to stay and anyone to shelter her.

Olena called me from the bus and offered to reorient our prototype to help people abroad. That's how came about. 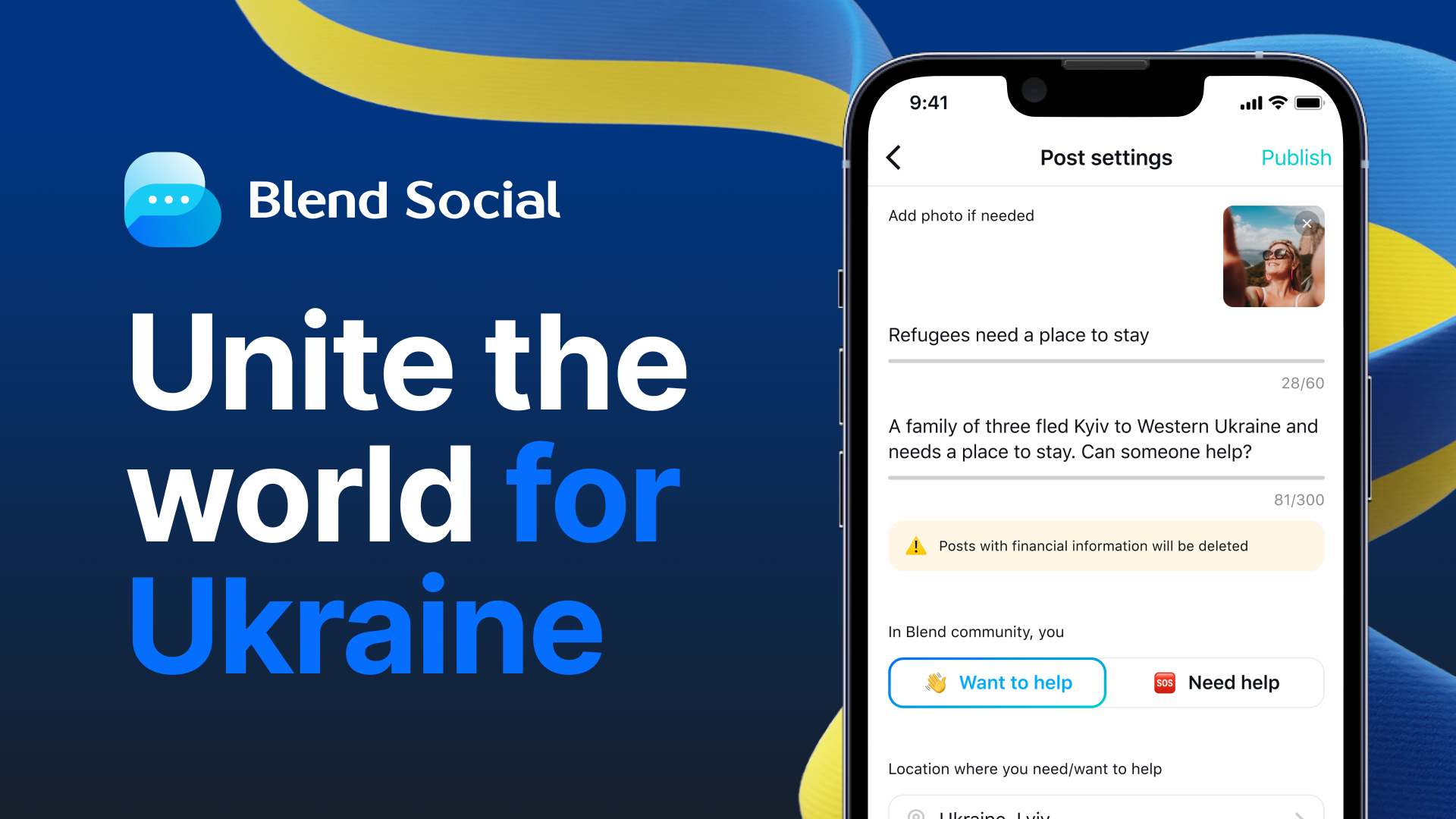 We started redesigning the app on the second day of the war. Via our corporate chat, we called on everyone who had the strength and time to join in. It took up to three weeks to complete the processing. We are especially grateful to the HR team, which took on PR - talked to influencers, and bloggers so everyone could learn about us. For example, thanks to HR we were shouted out by Oleksandr Pedan.

We can say that everyone in JMIND has at least partially touched on the work on Blend - and that's a few dozen people.

Let's try to outline some interim results: how popular was the product, what coverage (maybe some numbers), and where it is used more - in Ukraine or abroad? Maybe you have specific success cases of how Ukrainians found what they were looking for thanks to the application?

— Today we have almost 6,000 people using Blend Social. There could be more of them, but often the person who was helped deletes the account - not everyone is happy to be in need for a long time. About 10,000 people used the application for the whole period.

In the first month, there were many foreigners. Today there are mostly people in Ukraine. Due to logistical problems, it is difficult to send point parcels from abroad. Foreigners can help with money, but they prefer large public funds. That is why today mostly Ukrainians help each other via our app.

We did not keep statistics of "matches". We just had little statistics on what people help with, these are simple things, like buckwheat, diapers, clothes, etc. And this is still relevant because Ukrainians continue to lose their homes, jobs, and hope for the future. Therefore, believe me, for many a pack of buckwheat - is a huge help.

In general, we see that the first wave of volunteering has decreased, and people are burning out. But the displaced victims did not disappear. Blend Social remains a great opportunity to do good to a specific person. Especially if you want to see a short "action - result" link.

Tell us about your flagship product Infinite - what’s so new about it and how it can help users. And why live commerce in the first place?

— Infinite is a Live streaming SaaS solution for e-commerce, which easily integrates with any e-commerce site and allows you to make live broadcasts with the option to purchase goods and a lot of interactive tools such as chat, and reactions. So we try to bring the experience of an online customer closer to their live offline shopping.

Live commerce allows e-commerce sites to earn extra. This is not just a video review. Live broadcasts attract more attention, help the buyer to see the product, ask something important for them about this product, talk to other buyers, and make purchases straight from the video broadcast. 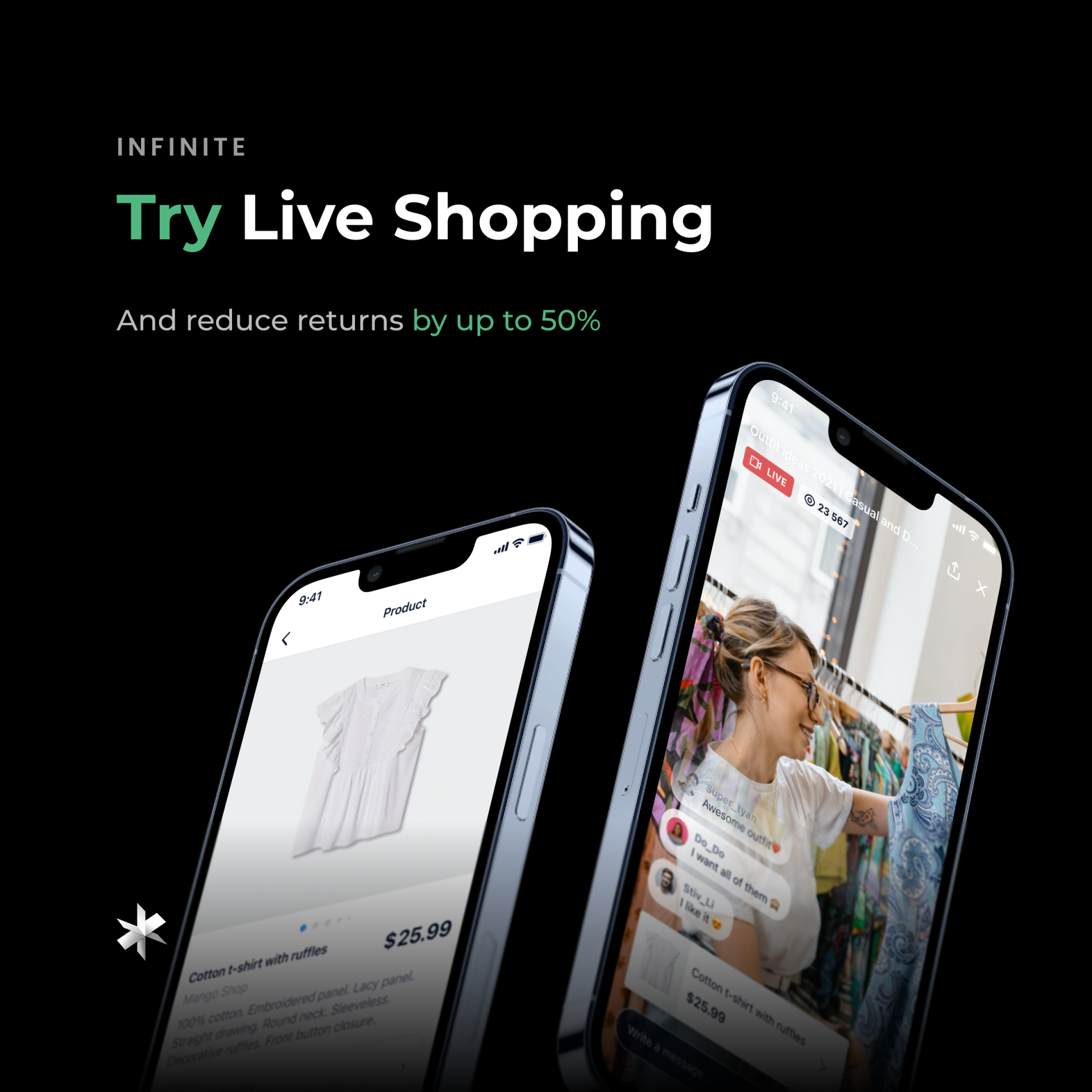 On the other hand, the return of goods falls, because usually only after receiving goods purchased from the online store, do users understand whether the thing will suit them. The gives more insights on this matter.

Will you promote the service in Ukraine?

— The irony is that our Infinite campaign in Ukraine was to start on February 24. But it was exactly the time we realized that this product was irrelevant to Ukraine. At least for now. At some point, the market will recover, sooner or later. It will take some time for the economy to recover, and for people to start thinking about the usual things of peacetime. Today, unfortunately, usual things have become a luxury for many.

We are currently considering options for volunteer projects that would help raise funds for the Armed Forces or buy the necessary goods for our defenders and we were allowed to showcase live commerce. To do this, we need a site where these products are presented, a platform on which we can land Infinite. This will be a very telling case for Ukraine and the world.

At the same time, we have changed our strategy for foreign markets. Rejected those who support Russia. Regions that support Ukraine - the United States, and Europe - were chosen for cooperation. These are developed markets, they are harder to work with, but we are grateful to them and are looking for brands that want to try new technology.

Tell us about the company’s strategic goals for the next six months to a year.

— We will scale our products to international markets.

continues to expand into Europe and the United States. Blend Social will operate as a charitable product as long as it fulfills its function. And after the war, we will find a new way of using it.

Is it still possible to grow during a war?

— Of course. Any crisis is a loss and an opportunity. And which one of them you’ll get depends on management, strategy, and resources. All our products have opportunities, it’s just they are harder to find during wartime.

Can you already say that the company has adapted to the new reality and working conditions or does it need more time?

— No one can say this for sure. The war goes on. Every day we adapt because we live like on a swing - and so it will be until victory. We have such an inadequate enemy that we need to adapt every hour.

And in the end, please give three main tips for business leaders who are forced to work in new conditions.

— The first is not to think "I have already learned everything and I know everything." Life is full of surprises, different surprises.

The second is to never give up, keep believing, and look for opportunities.

The third is to maintain internal balance. This is the only way to win.