Don’t Copy Others’ Success Stories: Write Your Own 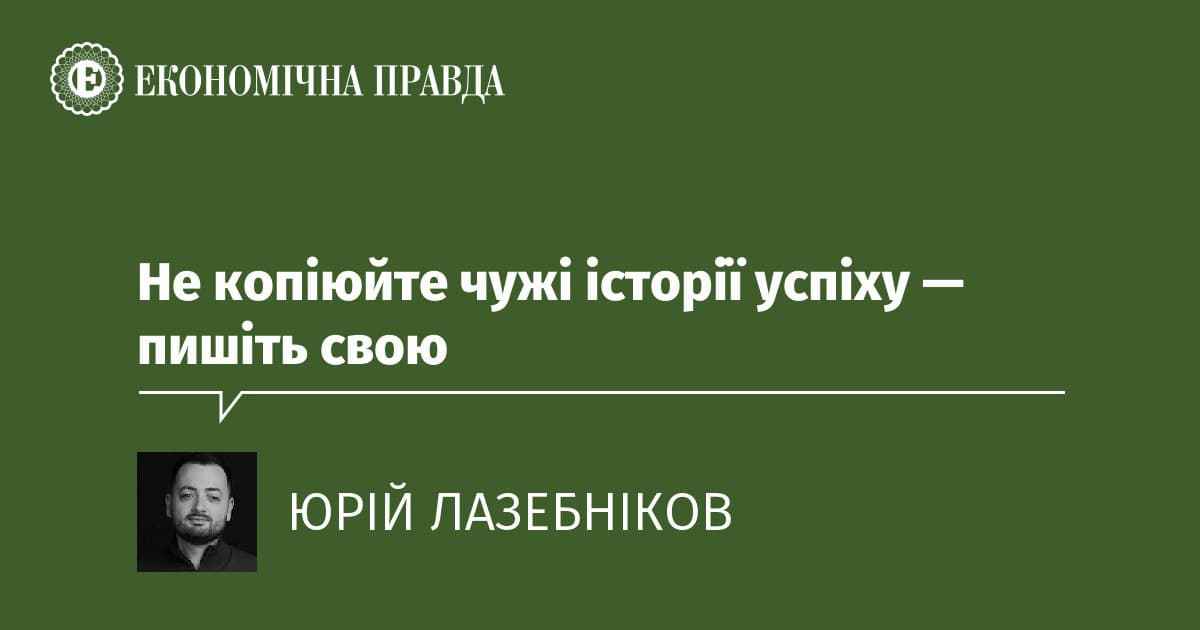 When copying a successful project, do not forget that it will not be possible to completely reproduce someone else's experience. And that's why.

I very rarely read successful businesspeople’s biographies. If they’ve written their own success stories, most likely they skipped over some icky facts, deliberately or not. If it was written by a biographer, there is even less chance of a comprehensive understanding of that success story. An outside observer approaches the story of someone else’s life with their own logic and will give their perspective of it. Thus, there’s almost no way to read a completely genuine success story; it is impossible to express all the factors and the synergy between them that led to success.

I am writing this text to disillusion you — to remove the illusions perpetuated by books and articles about success. People in business should dream big but keep in touch with reality and be able to remove illusions from their path. Always remember that it’s impossible to completely replicate someone else’s success. And here’s why.

I saw an amazing ad recently. There were photos of the founders of Hewlett-Packard, Apple and Google assembling their first computers and server racks in garages. The caption read: “These billion-dollar Silicon Valley companies started in garages. If you want to succeed, you definitely need a garage. We are ready to build it for you.”

Many people try to “buy a garage” (read: copy the approach of successful entrepreneurs). But in order to create HP, Apple or Google clones, you would need to accurately reproduce the context in which these projects were launched and developed.

Company success comes from founders’ life circumstances , including their thoughts, experiences and fears, which cannot be reconstructed. Add the influence of all the specialists involved in the project at different stages, and there you have it — a blend of people and conditions that is always unique.

Most successful people cannot repeat their success. There’s a term in show business for such people: one-hit wonders. This happens all the time in business. A person catches a wave and starts writing “useful” advice based on their unique experience.

The only things I like about success stories are facts and statistics. Sheer numbers and analytics provoke the reader’s brain to work, unlike banal phrases about patience and work. Unfortunately, stories like this are rare. Most readers don’t want to deal with boring statistics; they want to believe in a magic formula that can instantly turn a garage project into a unicorn.

No Pain, No Gain

Those who have gained success remember that their path did not only include ups. For example, when my first businesses started to grow, it was wonderful but also painful. We needed lawyers, financiers, HRs, more and more developers, etc., and they all had to be paid. At some point, instead of the expected increase, profits went down. Imagine doing everything you can to achieve success, and instead, you’re left with additional costs. This is the price you have to pay for the team, technology and processes that will one day allow you to have bigger orders.

We worked hard to earn more to keep the staff growing, while at the same time launching new projects. Now we have the infrastructure required for an international holding. Some would call it a success. But this is the result of many years of effort to scale the business, downs as well as ups.

Now TECHIIA operates all over the world. But in the 2000s, we were operating only in Ukraine and, in some ways, reinventing the wheel.

I’ve also reinvented the wheel on my own. In 2000, in my first year at university, I worked as a system administrator. I was making $180 per month and decided to become a 1C:ERP system programmer, since, at that time, they were making $180 for a few days’ work. Upon completing the course and receiving my first orders, I came up with the idea to distribute the efforts. There were many programmers looking for part-time jobs, so I took orders for $200 and outsourced them for $120 to save time and make more money.

Outsourcing underlies the work of many companies, but I still had to invent it myself. Did this experience influence my development as a businessman? Definitely. But I would have no idea how to reproduce this sequence of events and conditions for someone else to learn from.

Mix Your Own Ingredients

If I were to write my success story, I would describe how I fell from a tree in kindergarten, read Lermontov, watched Teenage Mutant Ninja Turtles. And I could never hope to cover all the chaotic causal relationships between events and situations. No one will ever repeat that sequence, just as it is impossible to live someone else’s life. Therefore, neither I nor anyone else has a perfect formula for success. All we have are the ingredients. And by mixing them, everyone will get their own result. Entrepreneurs engage in this alchemy. Sometimes it turns out great, and sometimes it turns into ashes and you have to treat your burns.

But if someone is not ready for this process, not ready to continue trying after a mixture burns away, no success can be reached.