TECHIIA and Tabletochki: we tell stories of children we help to fight cancer 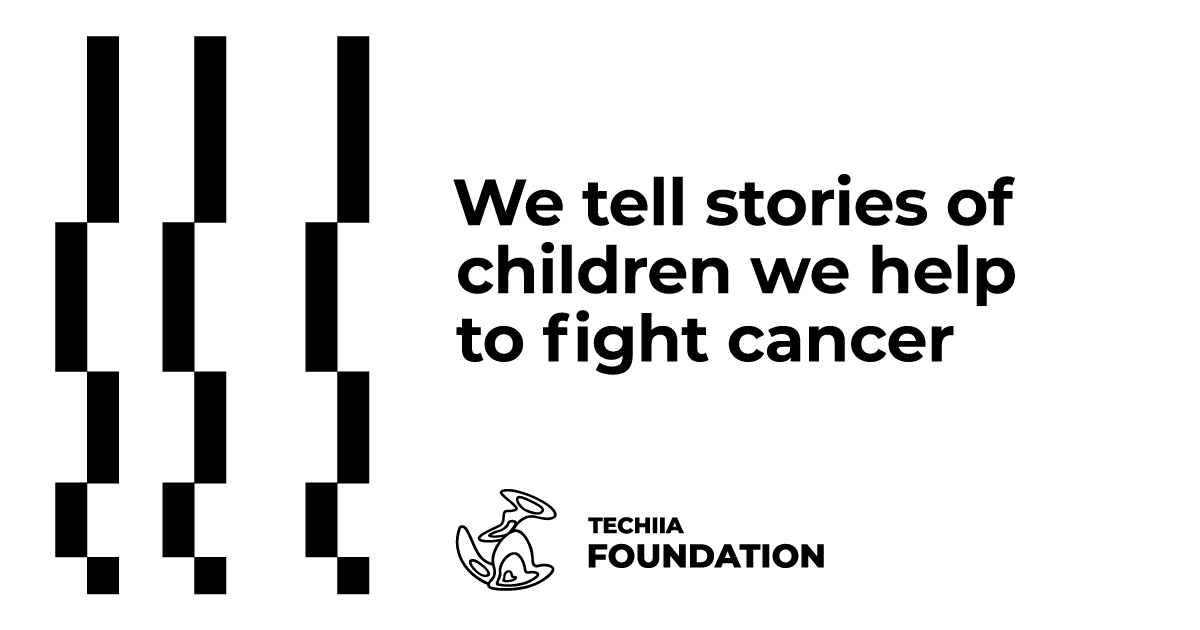 In October-December last year, the NGO Techiia Foundation and other Ukrainian philanthropists contributed almost UAH 6 million to support the purchase of medicines from abroad for kids supported by Tabletochoki. With these funds, they bought medicine from France, Germany, Austria, and Turkey for 44 children. Dozens of people have joined forces to deliver them to quarantined children.

The NGO Techiia Foundation has made a contribution of UAH 300,000, these funds were used to purchase drugs that allow doctors to use modern treatment protocols and increase children's chances of recovery. Medicines were bought abroad. This is a compulsory measure when the drugs are either not registered in Ukraine or the form or dosage of the registered drug is not suitable for the child.

"Thanks to socially responsible businesses, such as TECHIIA holding, children fighting cancer have received medicines that are not available in Ukraine. And with their help - their chance to recover. Together with these kids, we thank you for a reliable shoulder and this chance. We can’t tell you how thankful we are,” comments Svitlana Pugach, the Director of Strategic Partnerships at the

Here are some stories of little winners. Arthur has fought cancer twice in his 11 years. The second time the disease was more aggressive, the kid had to have a bone marrow transplant. Thanks to the medicines paid for by the NGO Techiia Foundation, the transplant was successful. And in early January, Arthur and his father returned home, where his mom and little sisters were waiting for him.

Mykola is 7 years old, he is from the Rivne region and he has a serious blood disease. In 2020, the boy went to first grade. But two months later he was hospitalized, where he undergoes difficult treatment. According to Mykola's mother, the charitable help gave him a chance to successfully undergo treatment and return to school, where he almost did not have time to study yet.

The disease also returned to 8-year-old Kolya. To defeat it a second time, a bone marrow transplant was needed. It was performed at the end of January this year, and the boy was prepared for a complex procedure with special drugs purchased at the expense of the NGO Techiia Foundation.

"The success stories of these children inspire us to continue what Yura Lazebnikov and I have been doing for many years. We believe that with our contribution we will be able to help overcome childhood cancer in Ukraine. And in this battle, we need as many allies as possible. The easiest thing that every Ukrainian business can do is to make a contribution to Taabletochki and they will definitely use these funds to the maximum benefit,” says Oleg Krot, the Managing Partner of TECHIIA holding.

Latest news
WePlay Esports and UESF eSports Federation held the CS:GO Kyiv Student Cup
The first tournament with a prize pool of UAH 11,640 was attended by teams from 16 Kyiv universities. The NAU Stewards team from the National Aviation University won that tournament.
How to create and structure technical documentation in IT: tips for the rookies and recommendations for professionals
My name is Iryna Isay and I am a tech writer at WePlay Esports media holding which is part of the TECHIIA holding. In this article I will share my experience how to draw up and structure the documentation.
Marianna Konina: "The brand demonstrates and speaks, and the consumer perceives and feels"
Marianna Konina, Chief Public Engagement Officer at TECHIIA holding, shared her vision on brand communication tendencies, how to make them effective, and who is the most successful in this area in Ukraine.