From civil aviation to military aides: how Culver Aviation develops its SKIF UAVs 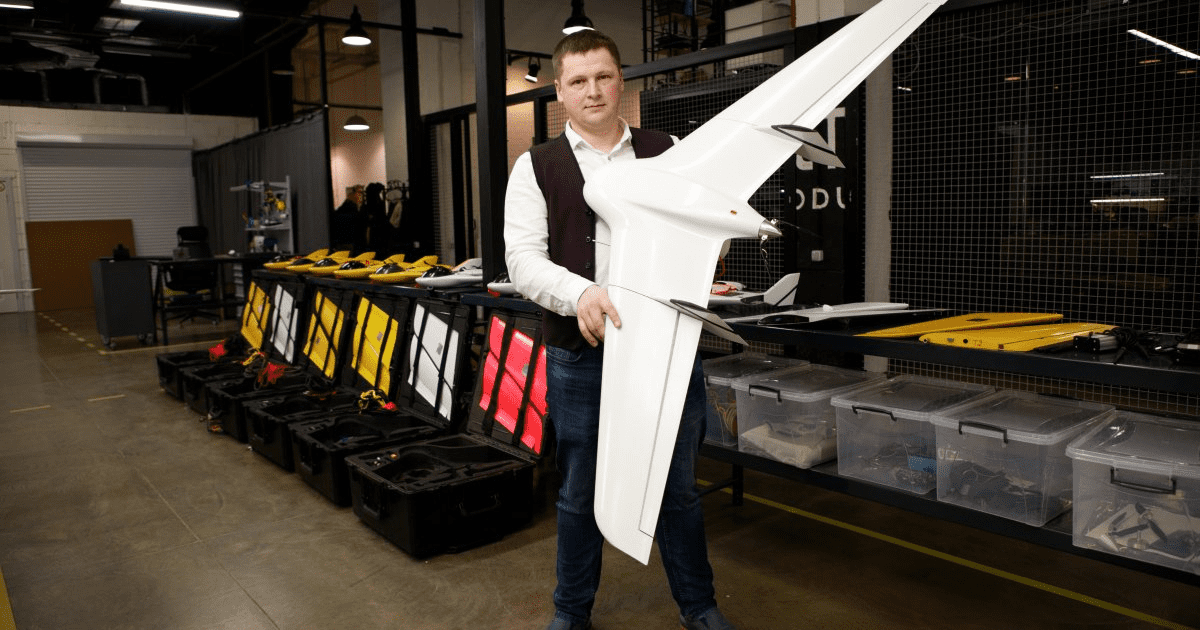 Before the war in Ukraine, there was an increased demand for unmanned aerial vehicles - drones were helping farmers and road workers, foresters, and rescue forces. Therefore, the interest of investors in startups related to drones was obvious. One such company is Culver Aviation, which manufactures SKIF drones and provides ground monitoring services. But the war changed everything dramatically…

Our conversation with Culver Aviation CEO Oleksandr Danylenko took place in peacetime, but while we were preparing the material, on February 24, Russia attacked peaceful Ukraine.

Our interlocutor saved his business rapidly. In the first days, he moved it to the western part of Ukraine. So we decided to meet again - this time to talk about how Culver Aviation was evacuating people, equipment, and concepts. And also about how the war enforced the civilian company to help the army.

The first SKIF in the sky

After graduating from school and receiving higher education at KPI, Oleksandr Danylenko, the future founder and CEO of Culver Aviation, worked in the IT field - creating the infrastructure for banks and hotels as a system architect. In 2013, he created his first company, and after the start of the war in Donbas, in 2014, he had the chance to join a volunteer group that supplied drones to ATO soldiers. Since then, Oleksandr’s office has always kept a flag with words of gratitude from our defenders.

“Then I saw the prospect of aerial monitoring from a business perspective. In 2016, we already had a self-developed aircraft - SKIF, which was reoriented to the needs of farmers. Immediately after the release of 5 sets, we passed them to customers. We also taught people to pilot these drones. Every year we have been improving the electronics and software of the aircraft, and in 2019 it became clear that we need to move to a model of selling services, not devices.

Oleksandr started a new stage of development of his business and at the same time, of finding investors to support his engineering and business ideas. In 2021, after many negotiations with various investors, Danylenko chose the TECHIIA holding as a partner - this is how Culver Aviation emerged.

“Since 2014, finding an investor has been a constant part of the job. Regular funding is crucial to keep the development process going. We were talking to many investors, changing the offer depending on their requests, and constantly improving it. Thus, our proposal was becoming better and better. At one point, we signed up with TECHIIA because of similar views on the company's development. I have known the guys from TECHIIA for a long time, but until our offer became a business one, it was just a friendship,” says the Culver Aviation CEO. 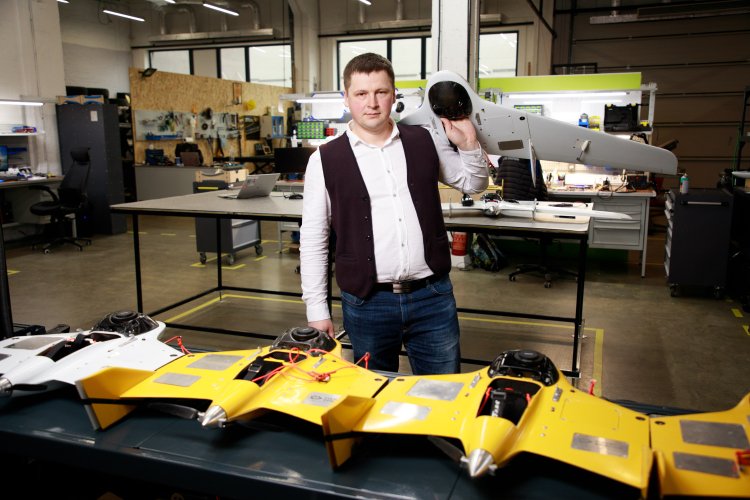 Before the war, the entire Culver Aviation team was working in Kyiv, creating the SKIF UAV, starting from electronics development to aircraft construction and pilot training. The office in Kyiv still operates, but another one has appeared in the western part of Ukraine.

There are designers and programmers in Kyiv - some of the employees have experience working in such air giants as Boeing Corporation. The total number of employees is more than 60 high-class specialists. Now some of them continue to work in the new office.

The creation of each drone begins with the computer of a design engineer that calculates and verifies everything from the size of the propeller blades to the aerodynamic performance. Then the drawings are transferred to the production shop, where molds are made and a fuselage of the future "bird" is created from a composite of fiberglass, kevlar, and carbon. 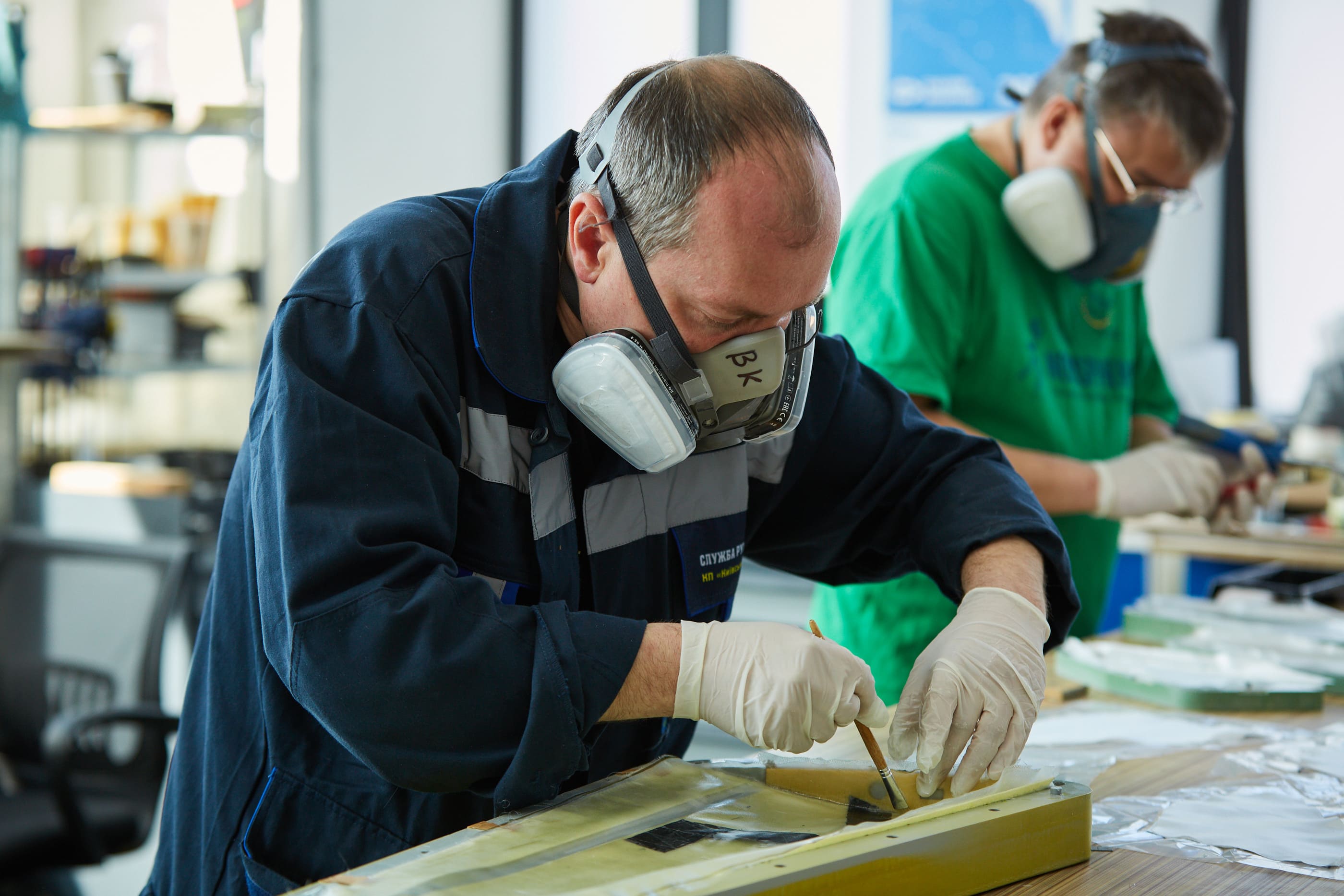 Next is the work on the technical content of the aircraft - autopilot, camera, necessary sensors, and other electronics.

“We use ready-made software and hardware sets, which our specialists adapt to the needs and tasks of SKIF. For example, we are adapting to the needs of our aircraft autopilot (as of early February - delo.ua), which was announced only a few months ago. And the first batch of such modified autopilots is already piloting SKIF in the sky, - says Oleksandr Danylenko. "Electronics engineers also create new aircraft control algorithms, add new features, and create our boards."

Dual-frequency navigation systems and cameras with a large sensor allow you to get an accuracy of 1 cm of land per 1 pixel in digital maps, allowing you to distinguish small objects in the area. This, in turn, helps you create high-precision maps and perform the necessary measurements and calculations in various industries. If you show the same map to an agrarian, a forester, a road worker, everyone will see it from different perspectives,” adds Danylenko. 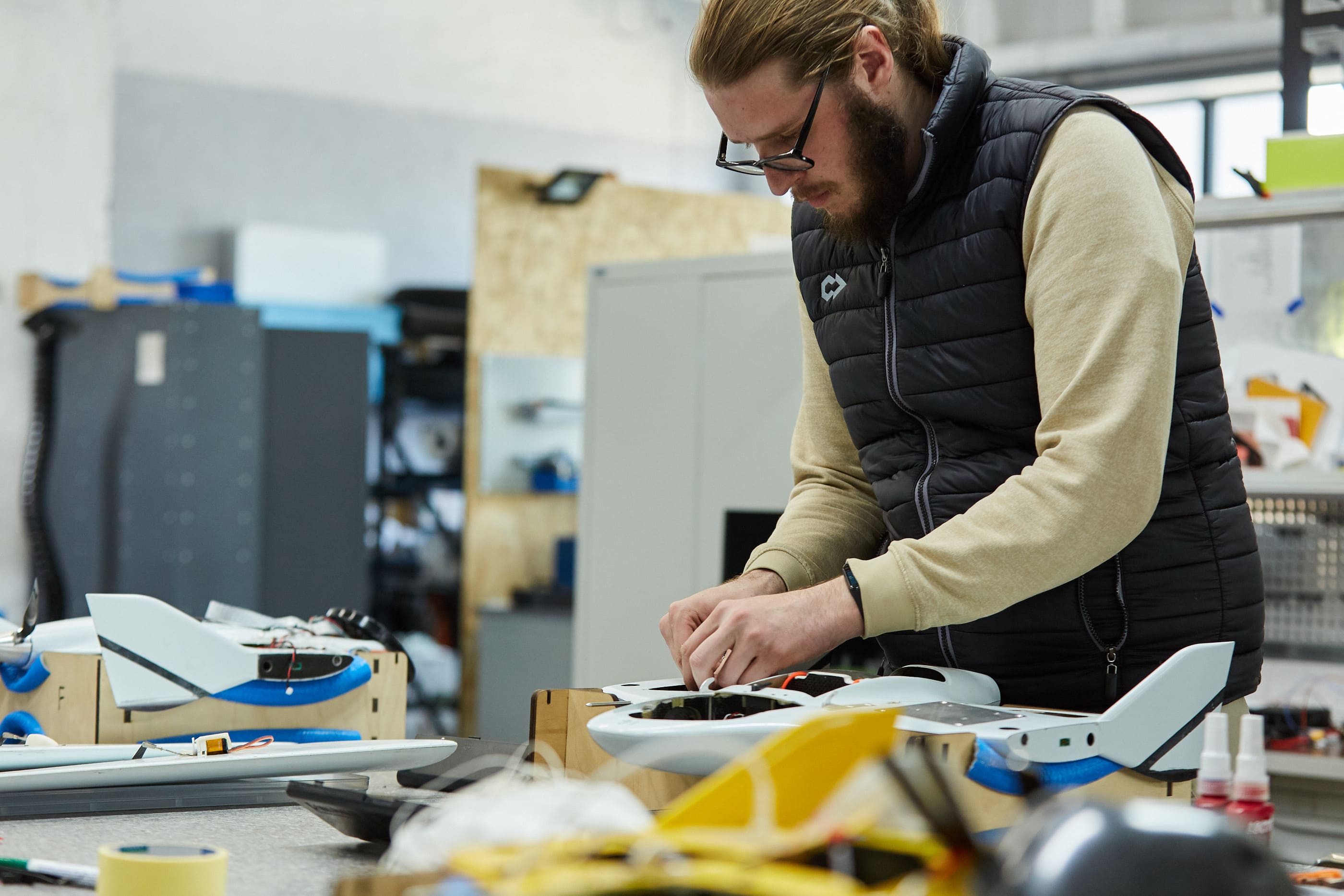 The shift in the business model

"We started by selling our drones to customers and training their staff," says Culver Aviation CEO. "But since 2021, we have completely switched to the Drone-as-a-Service (DaaS) model - we provide a full range of aerial reconnaissance services for farmers, road workers, foresters, etc."

The customer does not need to spend money on the purchase of equipment and its maintenance and does not spend time training their teams. If you need to measure the field - a professional team of operators with equipment arrives on the site, quickly performs a flight mission, and passes the recording of aerial photography to the office of cartographers and surveyors for data processing. The client receives the result in a few days. By the way, thanks to its developments, Culver Aviation provides the customer with 40 times more detailed images than the one taken by the satellite.

“We aim to develop the company in Ukraine, for this purpose we are expanding our fleet. If you analyze the market of competitors, none of them has even ten aircraft. And we have a significant number so we can provide a lot of services very quickly. As for foreign customers, these can be situational customers from neighboring countries,” says Danylenko.

Since day one of this war

“February 24, 2022, began with a call from a colleague at 5 am. He woke me up and said, “That’s it! It’s on!” I got my act together and went to the office immediately. It was around 8 am when I got there. Everybody in the office was tense. We decided to put up a big TV to watch the information and together decide how to react to it,” says Oleksandr Danylenko about his first actions after the war began.

The next step was to save all the information and concepts, so as not to lose the development.

“We have started preparing to leave the office in Kyiv. People are the most valuable thing in our company, while their work and achievements are in second place. Equipment or premises were not a priority. Then we decided how and when we would leave because in the afternoon it became clear that we should flee from Kyiv. By the next morning, we had to prepare transport for everyone who wanted to leave. It was also necessary to evacuate equipment and essential items. 10 people decided to leave. The first week we were staying in the Kyiv region, monitoring the situation, and then we headed west, which seemed safer,” says Oleksandr. 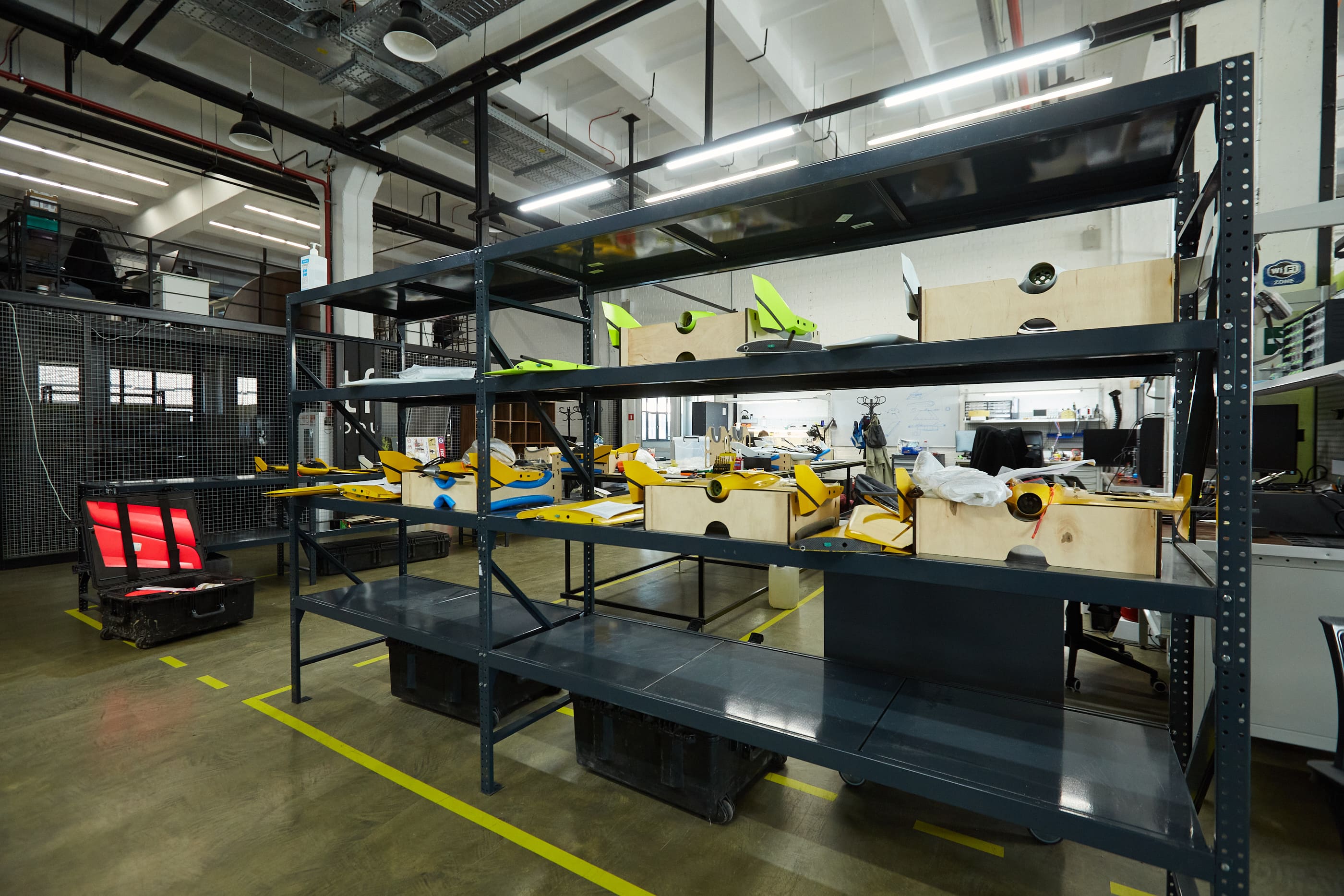 As a result, 40% of the team moved to the western part of Ukraine, while another 20% (mostly UAV operators) joined the Armed Forces, including the territorial defense.

After the relocation, we focused on the development of our new project. Finding accommodation for team members and their families was also one of the biggest challenges. By the way, the company paid for the first month of rent and realtors’ commission. In addition, all employees who needed financial support received a two-month salary in advance.

The war enforced Oleksandr Danylenko to return to what he started in 2014 - once again his drones are helping the Ukrainian military again.

“We donated 6 SKIF UAVs to the needs of the Armed Forces, their market value is over $200,000. That’s nothing compared to the number of lives they can save. We created them for cartography, field measurements, and road construction, but the military made a request and now our SKIF planes are helping the Army.”

Now the company is adapting to work in two offices, launching a new production site, and working on new projects for a global UAV market. They also started a free school for drone operators - a yet another small contribution to Ukraine's victory.