5 misconceptions about in-house lawyers that CEOs should destroy 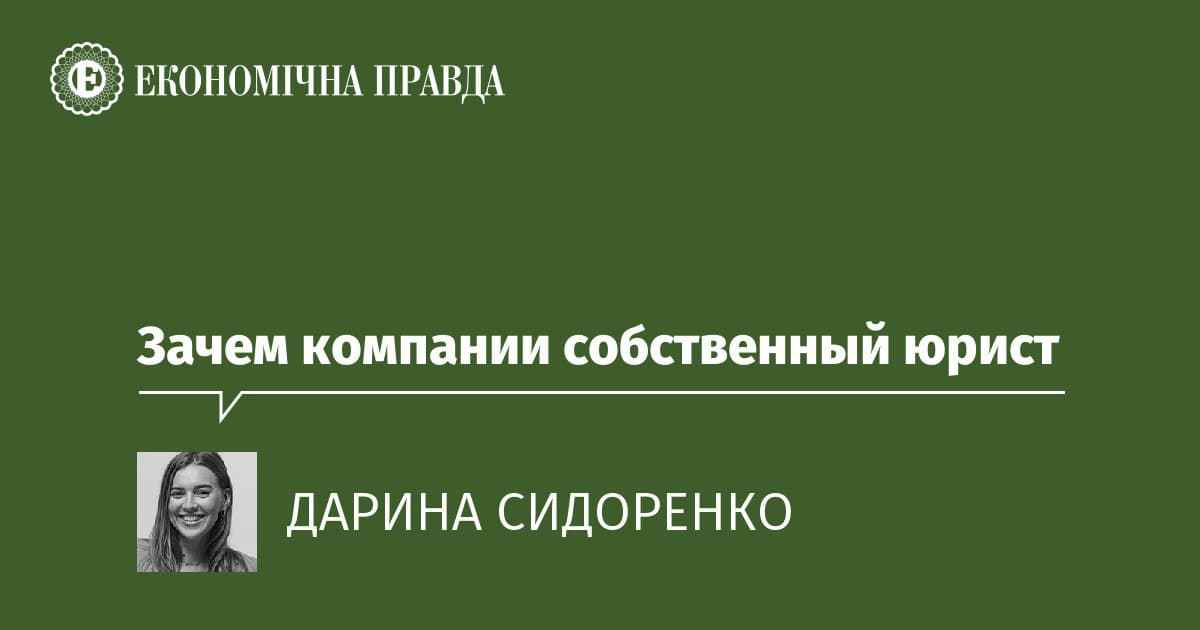 Daria Sidorenko, Legal Officer of the international holding TECHIIA — about what a lawyer in the company actually does and why he is neither a magic pill nor a fifth wheel.

Can a company do without a full-time legal officer and at what stage of its growth should a legal department be introduced?


Usually, in the early stages, companies do not hire full-time legal officers because of a misconception about the profession.

These stereotypes make the CEO’s life harder, because of the preparation of agreements and policies, risk analysis of business activities in the chosen jurisdiction are usually added to his/her tons of tasks.

And these are legal issues that affect the success of your business. The CEO delegates these issues last, trying to perform them on his/her own, or maybe with the help of assistants or even product managers. But this only increases the chance of mistakes.

Further, I will analyze the most common misconceptions that I have encountered in the market and heard from young entrepreneurs, and describe real-life examples that destroy these misconceptions.

Misconception #1: Hiring a lawyer in a team is only about increasing costs.

Often in the company’s business plans in the early stages, there is nothing about the cost of in-house lawyers. In the best case, the startup company will order a "package consultation", which will be standard contracts for internal use and to work with external contractors.

In practice, such agreements do not protect the company from all risks, and in a time of crisis, such a company will have to hire lawyers to solve the problem.

A professional in-house lawyer is a minimization of financial costs for the company. This is the first person they go to in case of any problem. The goal of a lawyer in a company is to protect everyone and everything from possible conflicts and claims.

A real-life example. The Ukrainian startup was getting ready to enter the American market. It came up with a unique product and a name for it and ordered a batch of products at the factory in China. The company soon learned that their name was already registered as a trademark in the United States with the same use class.

The company had to urgently hire intellectual property specialists to analyze other names and rework everything from marketing to product boxes.

Misconception #2: We will have a universal soldier-lawyer.

The lawyer’s profession in terms of variability and number of areas can be compared with the doctor’s profession. Every lawyer has his/her specialization. For example, Ukrainian corporate law, intellectual property, and personal data protection.

Usually, full-time lawyers know several fields of law and skillfully solve basic business needs. However, this does not mean that one person will be able to solve all the company's issues without consulting with external consultants, especially if the business model provides for foreign jurisdictions.

A legal officer is selected to perform specific business tasks of the company and in the future may create a legal department with different specialists.

A real-life example. The 80-year-old IT company hired a lawyer to perform all current tasks: contracts with contractors, support of sales and marketing, elimination of old gaps.

The CEO believed that the lawyer would be able to cover all areas independently. Eventually, after six months of work, the lawyer resigned because the workload was huge and the management did not heed the request to hire another lawyer.

How could the company avoid it? First of all, you need to listen to any person from your team. If a person can not cope with the number of tasks, they must be reviewed and changed. It was also worth investing in the company's annual budget for legal costs so that the lawyer could seek help from contractors.

Misconception #3: An in-house legal officer is an emergency.

Sometimes unforeseen burning issues happen in any company. And it is quite understandable that a lawyer cannot be expected to have an immediate solution to a critical situation.

It takes time, resources and documents to prepare a quality legal consultation. Making a contract with a template from the internet is a no-no, especially when it comes to big numbers or regulated jurisdiction (like China).

Speed does not mean quality, especially when it comes to international agreements. The phrase "you're a lawyer", that is, you know every law, does not work in life. Of course, a lawyer will be able to solve a burning issue quickly, but this rule does not work with complex issues and new unique situations.

Due to haste, the legal officer did not have time to deduct the entire contract and missed the sub-clause on the exclusive right to resell the software to other companies. As a result, the company was unable to sign any other distributors in this country.

How could the company avoid it? Since such agreements are not made and signed in one day, the sales manager knew exactly about the need for the contract and could send it in advance. It is even better to ask a legal officer to prepare the company’s version of the contract. As for the legal officer, he should have declined his colleague’s request for a quick check of the contract but take enough time to investigate it completely.

The lesson here is to communicate on time and prevent artificial burning issues in the company.

Misconception #4. An in-house legal officer will bring excessive bureaucracy to the company.

Usually, when you hire a full-time legal officer a bunch of previous shortcomings comes to the surface: a lack of contracts with employees and office policies, gentlemen's agreements with contractors. Such gaps can lead to data leaks, lawsuits from regulators, etc.

Opposite to social stereotypes, not all lawyers like bureaucracy. They try to simplify the processes but keep their beneficial side for the company. The lawyer's task is to prepare documentation, templates, and processes that will not require much time to reconcile. The system reduces bureaucracy.

A real-life example. The customer support department collected data about its clients. Following the GDPR’s (General Regulation on Personal Data Protection, adopted by the EU in 2016) entry into force, the company had to revise the principles of information processing and not collect redundant data, i.e. city, date of birth, and last name.

The company ignored this. As a result, the company was fined by the European regulator.

How could the company avoid it? Simply by creating processes in a timely manner and adapting existing ones to the new laws that apply to the company, as well as drawing up new rules for the call center, according to which it would collect only the information necessary to provide the customer with an answer.

Misconception #5. The legal officer works alone and does not interact with colleagues.

In fact, a lawyer is the team's best friend and a team player, who constantly interacts with colleagues so as not to miss the start of the process or project. Of course, lawyers usually need peace and quiet, but this does not apply when synergies and cooperation with colleagues are needed to solve complex issues.

The lawyer should be part of the top management. In this way, he/she will be able to comment in time that certain ideas, developments, or partnerships have legal risks for the company and may cause financial and reputational damage.

A real-life example. The marketer asked the lawyer to check the ad and say if it could be launched on the market. However, the advertising campaign has already been launched in Europe and North America. The lawyer outlined the use of someone else's TM and comparative advertising. Advertising had to be urgently withdrawn and reworked.

How could the company avoid it? The legal officer should have established contacts with colleagues and explain to them the need to agree on advertising or other products at the very beginning. And the team should have not been afraid of a legal officer and do not think that he/she will reject the idea. It is necessary to consult with a lawyer in time and study the possible legal risks beforehand.

A legal officer is an important player for any company, especially if this company wants to become a "unicorn". Of course, there are small IT companies where an in-house legal officer is not a must.

In this case, you can hire outsourced professionals to minimize costs. Such a person is able to perform non-urgent and current tasks but is unlikely to be able to quickly solve complex business issues.

With the growth of the company, the need for a full-time lawyer will increase, as the burden on other professionals will also increase. As for when to hire a full-time in-house legal officer ‒ it is up to each company individually.

For business, an in-house lawyer is a professional who helps identify risks, avoid potential issues, and reduce company costs.