"For me, esports has long been a separate industry, new professions, content" ‒ CFO of TECHIIA holding Eugene Nikolaichuk 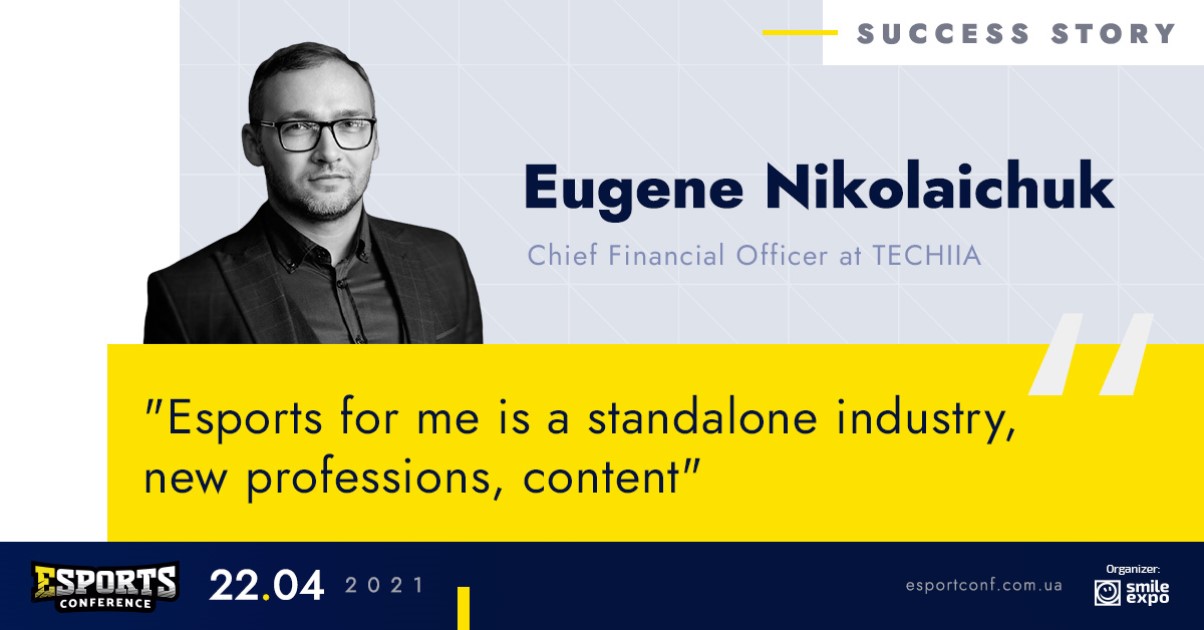 CFO of the international technology holding TECHIIA Eugene Nikolaichuk has been working in the field of finance for over 15 years. Holding various positions in Alfa-Bank, Media Group Ukraine, Renaissance Life PJSC, and other companies, he has established himself as a highly qualified specialist who understands financial management, audit, planning, and investment analysis.

Eugene got his first experience in the esports industry at WePlay Esports media holding, part of TECHIIA, where he managed to form a financial department. Today he is responsible for the development of the finance function, implementation of accounting and audit systems in TECHIIA, which brings together 10 projects and over 1000 experts.

Evgeniy told the eSPORTconf Ukraine 2021 team about his professional path and listed the main areas of activity in the TECHIIA holding. He also explained how the pandemic affected esports and discussed what nuances esports companies should consider attracting investment.

The challenge levels and approaches were different everywhere, like putting together a puzzle from different industries and skills.

I have been in finance for over 15 years. I started as an internal economist in a Ukrainian holding company, which was engaged in logistics and construction of non-residential premises. In a large agricultural holding, I kept management accounting and budgeting. Then I worked in the investment division of Alfa-Bank, where I controlled the targeted use of funds for one large loan of a significant player in the agricultural segment.

At Renaissance Life PJSC, which deals with life and risk insurance, I was in the leadership of the financial department. I had analytical reporting and worked with an auditor. Then I was offered the position of Deputy Financial Director at the Media Group Ukraine media holding (TV channels Ukraina, Futbol 1, Football 2, NLO TV, content service Oll.tv and others). There, according to the classics: interaction with the management company, reporting, payments, cost calculations of the shooting process.

After that, I had a short but rich experience in a marketing agency, in which I managed to implement an accounting system and streamline financial management. And immediately before TECHIIA, I worked for a year and a half in the FP&A department of the VEON telecom group, in charge of Ukraine, Georgia, and Armenia. In particular, I compiled a business case for the purchase of 4G licenses before the national auction.

The challenge levels and approaches were different everywhere as if you were putting together a puzzle from different industries and skills. So now I understand very well the top-level processes, and I see details, for example, small errors in financial documents.

Everything around me was more about numbers than about creativity

The sphere of finance is my long-term mutual love. I like to joke that numbers are closer to me than people, in the sense that I like work in which there is much less emotion or unpredictability than working with people.

Perhaps, childhood left a big imprint: parents are engineers, my older sister is also in finance. Everything around me was more about numbers than about creativity. Therefore, it is an organic choice.

Esports as a phenomenon appeared in my life a long time ago ... And I got my first experience in the industry at WePlay Esports

I got my first experience in the esports industry in the WePlay Esports media holding, which then became part of the TECHIIA holding. Here I had to build all the processes: management accounting, budgeting, reporting, analytical materials, work with shareholders. In fact, I formed a financial department first there, and then throughout the holding.

But esports as a phenomenon appeared in my life a long time ago. I love very much Real-Time Strategies: StarCraft Brood War, and now SC2 is in the first place. But I also always remember Heroes of Might & Magic. I still follow the top StarCraft players. I know all the mechanics, I play periodically myself when I have free time. I perceive this hobby as "new chess".

For me, esports has long been a separate industry, new professions, content. It's just that you either love this content or not.

At TECHIIA I work in several large areas

Now I work in the TECHIIA holding in several large areas. First, over the past year, we formed financial departments in all operating companies, of which there are more than ten. Now we are deploying a rolling forecast system of long-term planning and we will live with forecasts. That is, there is a close-up plan for the year and quarterly cycles that we review to adjust the course of each business.

Second, we are launching centralized analytical reporting based on Power BI. Over time, we will less and less gather in the office and watch presentations of reports from more than ten CEOs. But at any time in the interactive report, everything can be viewed in detail. Our task is to deploy this in all enterprises with the same standards and the same methodology.

Third, we are introducing an internal audit system. We are becoming transparent for ourselves and enhancing clarity for the market and investors.

Fourth, we are introducing an automatic management reporting accounting system in all companies of the holding.

Finally, a very large part of the work is business case analysis. Our founders Yuri Lazebnikov and Oleg Krot are media people. They are open to new ideas and they generate or accept external ones. I am involved in supporting them in investment decisions. We have already developed and implemented a separate body ‒ the investment committee, which analyzes business cases and procedures by which we accompany new businesses.

The strategic advantage of esports is that it is still tied to online, and not to any physical location.

Cybersport survived quarantine easier than others due to its specifics. But I felt it in all directions. Large-scale offline events cannot be held. Customers' purchasing power has plummeted. Advertisers have cut costs. Because of this, you reduce your marketing budget. But the main thing here is not to overdo it, otherwise, you can cut off the input cash flow. You need to constantly balance.

The strategic advantage of esports is that it is still tied to online, and not to any physical location. For example, WePlay Esports has more online views, work for streamers and commentators. We have redesigned the structure and schedules of our tournaments. We did a lot of work with all our contractors, agreed on discounts and deferrals.

Quarantine has accelerated our critical attitude to cost structures. We have increased our internal control several times. Now the story about budgeting and spending is almost at the ideal level because we understand what every hryvnia and dollar is spent for.

It is necessary to prepare for investments

The esports industry is on the hype right now. Crunchbase constantly writes newsletters about investments in esports companies ‒ M&A deals ranging from millions to tens of millions. However, there are two points.

Firstly, when we say "esports", we need to agree on the definition of the concept. Every day, someone invests in some esports team. Very often the press covers the contracts of commentators or streamers. And business is a completely different focus. The team is interested in a celebrity, a small fund, and a business is a production company, a game publisher, a large investment fund, or a media group. The directions are very different.

Secondly, one should not assume that through a hot topic it is possible to put a company on the market in any condition and it will be eagerly grabbed. No, there are a lot of criteria. It is necessary to prepare for investments. Otherwise, at the stage "I need money to survive", most likely, you will have to give up the company's shares at a large discount. First of all, you need to build a mature business: clear financial models, expansion, continuous improvement of internal processes, and cost efficiency control. Actually, this is how WePlay Esports lives.

... I will share a few life hacks that can inspire more people to come into the esports business.

Esports is a sport that does not have a local binding. Teams can take part in one tournament, which can include Ukrainians, Americans, and Brazilians. The broadcasts take place on the international platforms Twitch and YouTube. But how can we make sure that Ukraine benefits from eSports?

We've learned how to make money from esports, and I'll share a few life hacks that can inspire more people to come into the esports business.

Latest news
Why can't a licensed toy be cheap? Let’s take a closer look.
Yuri Antoshkin, the company's Managing Partner, talks about the responsibility of the manufacturer and why licensed products cannot be cheap.
Cyberspace is common territory. How businesses protect themselves from cyber threats
Denis Nesin, Chief Information Officer of TECHIIA holding, told about how businesses can protect themselves from cyber threats.
WP Merchandise has released a collection of plush weapons based on SoulCalibur VI
WP Merchandise has released a new plush collection based on the SoulCalibur VI game.