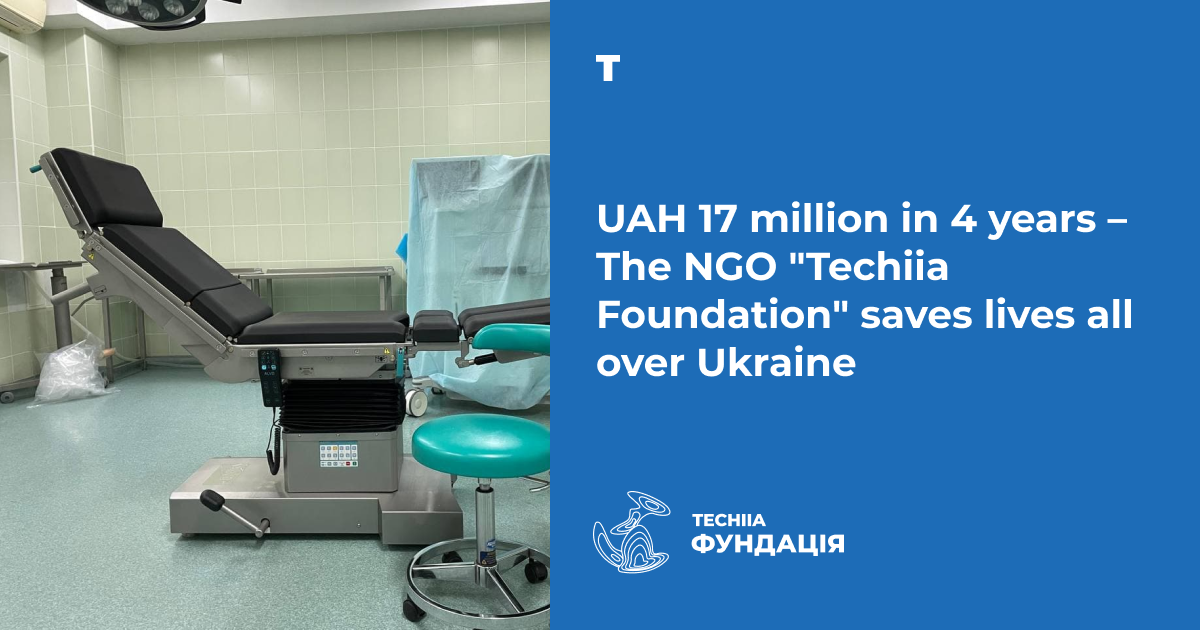 All the equipment provided by the NGO “Techiia Foundation” to medical institutions in Kropyvnytskyi, Rivne, Sumy, Kharkiv, Zhytomyr, Cherkasy, Dnipro, and Kyiv, helps to save patients. UAH 8.5 million was spent on purchases in 2021 alone, and a total of UAH 17 million was allocated on charity projects over the past 4 years. By the end of this year, the latest medical equipment was installed — a multifunctional surgical table at the Kyiv Children's Clinical Hospital №7 and a coagulator, aspirator, and surgical lamp at the Dnipropetrovsk Regional Children's Clinical Hospital.

This year, the NGO "Techiia Foundation" has increased the amount of aid to hospitals. The Children's Hospital in Kropyvnytskyi received a hematology analyzer and infusion pumps for chemotherapy. Children's hospitals in Rivne, Sumy, and Kharkiv perform complex surgical interventions that were previously inaccessible to patients. And an ultrasound dissector for the emergency room and a skull fixation system for neurosurgery help save patients in hospitals in Zhytomyr and Cherkasy. Hospitals in Kyiv and Dnipro were the last to receive equipment from the NGO "Techiia Foundation" this year.

A universal operating table for the Hospital №7

KNP Children's Clinical Hospital № 7 is the only medical institution in the capital, which provides emergency pediatric craniofacial surgery. The hospital also performs unique planned operations for reconstructive care and rehabilitation of children with congenital and acquired defects of the craniofacial area.

A new Serenada operating table from the Polish manufacturer ALVO worth almost UAH 1.1 million was recently added to the hospital's arsenal. It was purchased and transferred to the hospital by the NGO "Techiia Foundation".

The main feature of this table — 6 sections and a wide range of accessories that allow simultaneous operations — simultaneous surgical manipulations of professionals in various fields. This is especially important in emergencies after injuries or accidents. And the filler with the effect of memory prevents the formation of bedsores during long operations.

Once ALVO found out that this is a charity project, the table maker equipped it with an additional engine for free. Coupled with the main ones, this guarantees 20 years of operation of the mechanisms that regulate the height and inclination of each section.

The Neurosurgical Department of the Regional Children's Clinical Hospital in Dnipro treats oncology patients. Now local surgeons will operate easier, and operations will be faster and with minimal risk of side effects.

The NGO “Techiia Foundation” purchased a set of equipment worth UAH 2.15 million for the department, which has proved itself well at the regional hospital in Kropyvnytskyi, with which the Foundation has been working for 4 years now. Electrocoagulator allows doctors to remove brain tumors and stop bleeding without the risk of damage to adjacent areas.

The silent aspirator sucks out liquids during operation, without muffling signal sounds of the surgical and monitoring equipment. And the shadowless operating lamp provides high-quality illumination of the work area and minimizes the formation of glare that can blind the surgeon.

"In 2021 we were able to do even more good deeds than we planned. Six hospitals received quality equipment, the Eva Inclusion and Correction Center started providing unique rehabilitation services, and TECHIIA employees took part in charity projects with the Tabletochki Foundation and the Old Lion Publishing House. This great result motivates us to do even more next year. Join the good deeds, because qualitative changes can be implemented only in synergy," — says Oleg Krot, the co-founder of the NGO “Techiia Foundation'' and the Managing Partner of the TECHIIA holding.

It’s worth recalling that since 2018, the NGO Techiia Foundation has updated equipment in Ukrainian hospitals in the amount of over UAH 17 million. Medical facilities in Kyiv, Odesa, Dnipro, Kharkiv, Rivne, Sumy, Cherkasy, Bila Tserkva, Kropyvnytskyi, and Zhytomyr received modern devices. The Techiia Foundation also fully funds the Eva Inclusion and Correction Center, which helps children after cancer and children with disabilities.