A guide for a designer who becomes a manager. Episode 2 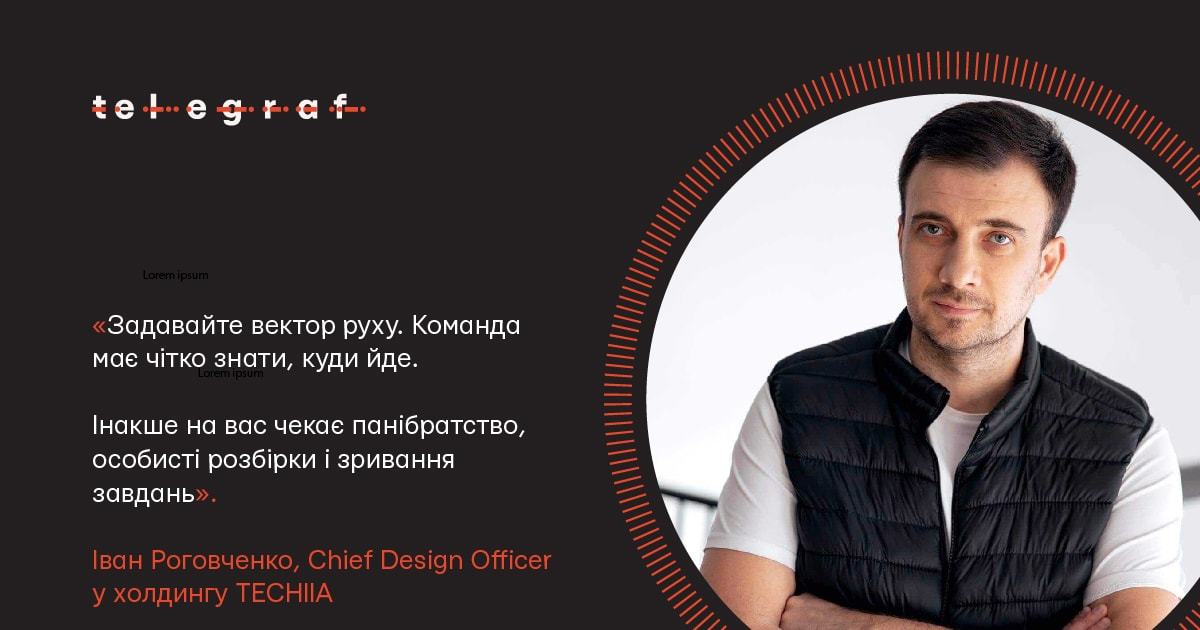 Ivan Rogovchenko is TECHIIA’s Chief Design Officer and also the . He has been working in design for 15 years, and three of them he has been leading creative teams. Ivan told Telegraf.Design about what problems the designer faces as a project manager and how to handle new tasks. This is the second article of the series on the transformation of a designer into a manager.

In Episode 0 we figured out when exactly the designer should become the manager and when it makes sense to rethink your current career. In Episode 1 we discussed ways to stop doing everything yourself and carve the role of leader.

And the current episode I decided to dedicate to the basics of working with a team. Let's talk about bad metaphors, selection of the right performers, and relentless search for good shape. Because an effective team is your top priority.

Lead With A Goal

Many companies claim that their employees are like one family. Sounds proud, but I think the metaphor is not that good. When it comes to jobs, business performance and value creation must come first. The “family” system is usually about something else. Yes, the company motivates its employees and encourages them to become better. But in general, it takes care of everyone and does not set goals.

I prefer another metaphor: the employees are like one sports team. People work for the same goal and mutually reinforce each other. If someone is weak in everything and/or quarrels, sooner or later such a person leaves the team. The main point here is not about love or friendship, but overall efficiency.

At the same time, a healthy spirit of close relations is important in a close-knit team.

We observe that there are far fewer conflicts between people if there is communication other than work. It is tied in different ways. For example, employees came to the company the same day, sat next to each other, played in the same team at a corporate party, and implemented an idea together. Even if team members just go out for a beer together from time to time, the chance of a conflict and misinterpretation of feedback is very low.

Team bonding was not invented by stupid people. In a design team, a pleasant tone of communication is especially important because our work involves constant evaluation and criticism. If you are a sensitive leader, it is relatively easy to find a good team-building format. But often the biggest part is made by joint work on projects.

Can communication even in a sports team become too informal and start to interfere?

I think it can — if performers have lost their goal. Let's take a football team. If it is trained to win the championship, the whole process — training, rest, strategy, skills — is built around victory. When there is no goal, there’s no structured process: a lot of for-no-good-reason running during the day a lot of beer in the evening, and a lot of quarrels.

Set the motion vector. The team must know exactly where it is going. Otherwise, you will have brotherhood, personal showdowns, and disruption of tasks.

Select Performers With The Similar Mindset

There are no ideal employees. Everyone is great at something particular and quite bad at some other things. Your task is to evolve strong sides and take care of weak sides. Create the team so that members complement each other.

There are two criteria for selecting a new person. Such a person has to:

I put them in this order for a reason. You add a new person to those people who are already working together. Even if it is a top performer, you have to be sure that this person will fit in, what he/she will bring in terms of design, and whether he/she has the same mindset as the rest of the team. At the same time, pros want to work with pros. Otherwise, the speed of mutual work drops down to the speed of the slowest team member.

Our holding, for example, grows rapidly and all processes change constantly. It is crucial to us that new people do not demand strict standards and are flexible and do everything quickly.

Here is one case. During esports tournaments, we have a task — to get photos of players ready for captions in broadcasts. To do this, you need to take a photo, cut it from the background, correct it, retouch it. About 10 people take part in the process — from the photographer to the person who uploads that photo into the system. This is a difficult task that needs to be done in just 8 hours. Due to the fact that people work together, we do everything on time.

In our company, we use the so-called bar-raising. After the interview and test task, when we are ready to make an offer, the candidate has a short interview with a person from another department. Basically, it is a free conversation on the topic of values, views, approaches. So we check how well we fit together in terms of culture.

After several hundred interviews as a bar-raiser, I singled out three points of view that reveal human values well:

Bar-raising is no less important than other stages when it comes to making a final decision.

Even if the portfolio is great but the mindset is totally different, we have to say no to such a candidate.

Let me clarify that the mindset cannot be good or bad. It just may not match. By clarifying the (non) coincidence, you take care of both the team and the candidate. After all, the latter may believe that this is his/her dream job, but it may be difficult for that candidate to fit in your team, while in another place such a candidate may become the perfect fit.

Before start working, your employee must clearly understand your personal goals and align with them.

Goal alignment should be transparent and comprehensive to both of you. It is the results and benefits that will be the argument when reviewing positions and salaries. Clear and structured goals are the foundation.

To track the employee’s growth you can use a very convenient tool — a skill matrix or, in other words, a competency map. It is filled in by a performer and his/her manager. Then the matrix is jointly calibrated, and the designer chooses which of these skills he/she wants to develop in the nearest future.

Here's a good example of .

The competency matrix is well mastered by outsourcing teams. In particular, it helps to justify the estimate to customers. And now product companies start using this tool.

We are just at the stage of integrating the competency matrix. In the meantime, we start from the value that a person can bring. Therefore, each designer usually has 2-4 personal goals, on which he/she works for six months.

For example, before opening any vacancy, a list of tasks is formed for the next couple of months, while the person will pass the probation period. If we expand the current function, then the first goals for the rookie are specific function tasks. If we launch a new direction, product, function, the goal is to make them work, to fit into the context of the company.

Suppose we run a service design direction. It is necessary to integrate it with other design processes: to think over methods, data gathering and transfer interface, data storage, etc. After that, we can start interviewing users to receive feedback. Next, custom insights need to be converted to specific steps in the roadmap.

Ultimately, we implement change, monitor improvements, and conclude how effective the direction and its driver are. After all, we take a person who will potentially manage this function.

All this is hard to implement in a startup. They work differently: everyone does everything, resources are limited, chaos is everywhere. But if the business goes well, the company will provide allocation and systematization for sure.

Team evolution is just like biological evolution. One cell — many cells — cell and tissue differentiation — increasingly specialized functions in each specific part of the body.

As the manager of this system, you are the nervous system as a whole. You are required to be sensitive to what is happening inside the "body" and to make changes promptly.

Observe the staff. For example, one or several designers perform tasks of the same type well — better and with great pleasure cope with graphics for social networks or interfaces. It may be time to allocate them to an autonomous mini-team, which will go even deeper into these functions, but at the same time integrate them into the overall body.

For example, I will describe how the WePlay Esports’ design team has evolved in three years.

At first, it was just a room for designers. Then teams were added to develop the company's products — and the designers were divided into these teams. Since WePlay Esports turned into a media holding with broadcast and content, we added an Art Director.

Now at WePlay Esports, everything is segmented by directions. There is a creative team that develops identity, branding, stylistics for tournaments, concepts. There are product designers, SMM designers who work with SMM marketers in an independent product team. There are marketing designers. UX-designer deals with back office and internal products. Recently, CX Lead has appeared, which is responsible for user research, interviews, and hypothesis generation.

I think this structure will continue to change. You should not be afraid of changes. On the contrary, your task is to build the most effective structure that will give great results.

As for the entire TECHIIA holding, each company has a Head of Design or Chief Product Designer that combines design tasks and teamwork. We distribute teams depending on the complexity of the company.

It already makes sense to divide a team of 5-7 people into formal subgroups.

Sometimes I am asked: how many people should I allocate for a specific direction? This is a very individual thing. It is strongly associated with the ability to focus on narrow tasks and the formation of personal goals.

Even two rookie designers with similar desires later show different interests — and at least they need different tasks. And it already makes sense to divide a team of 5-7 people into formal subgroups. This will help when hiring: the more accurately you understand the strengths of the team, the more important it is for you to see what "blind spots" it has left, and the more narrow specialists you need.

The only remark: do not turn optimization into a process for the sake of the process. No need to shift people often or impose a new structure if the team is satisfied and shows good results. Allow it to evolve itself and keep your hand on the pulse of the team.

I will tell more about the pulse of the team and more subtle things that managers are usually silent about in the next episode.