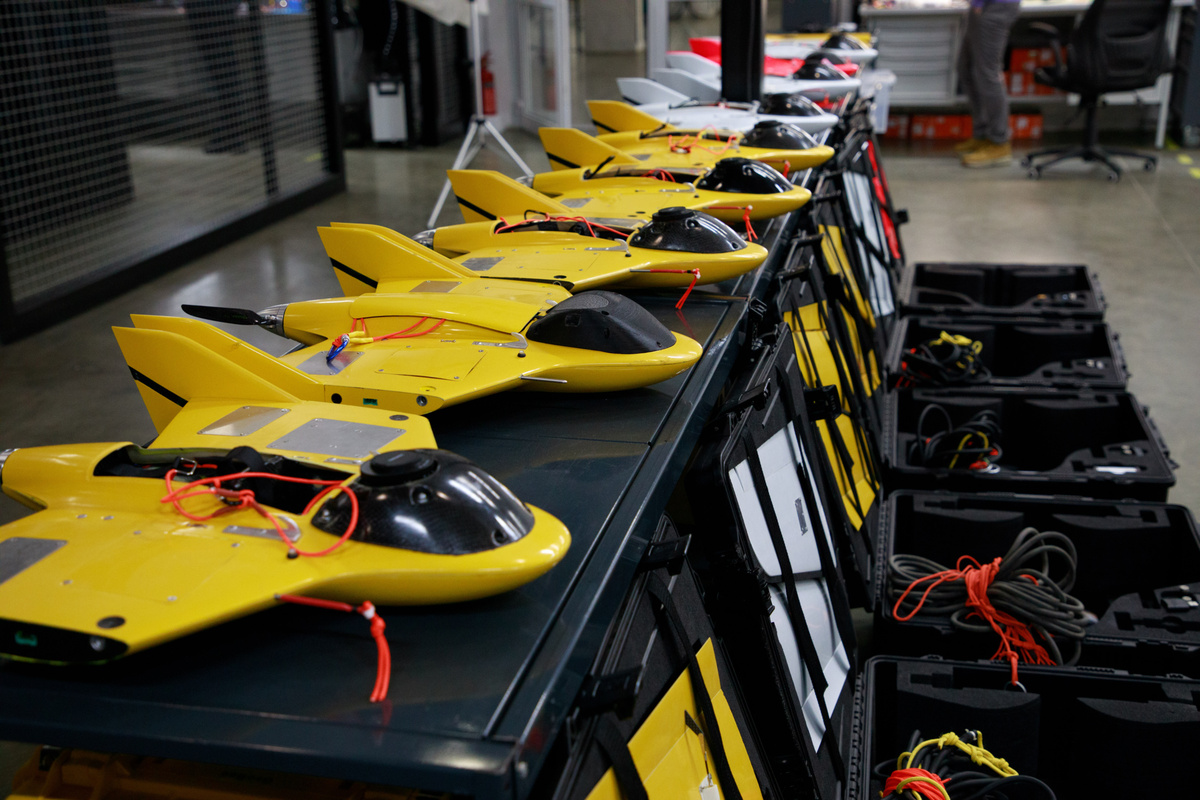 Drones have never been such a hot topic in Ukraine as this year. Social networks are still full of fundraisers for Bayraktars, mapping planes, and even basic quadcopters.

Against the backdrop of the war, Ukrainians are discovering the saturated global drone market. Our engineers also excelled at it with technological "birds". One of them is SKIF. Having military roots, this UAV has been solving civilian business tasks for several years.

In an article about our partner , we talk about the history of this UAV stretching back to 2014.

In peacetime, the fleet of Skifs flies over tens of thousands of hectares to help farmers, ecologists, and rescuers make decisions. SKIF’s predecessor was also surveying fields. But it was not inspecting roads and farmland, but enemy positions. 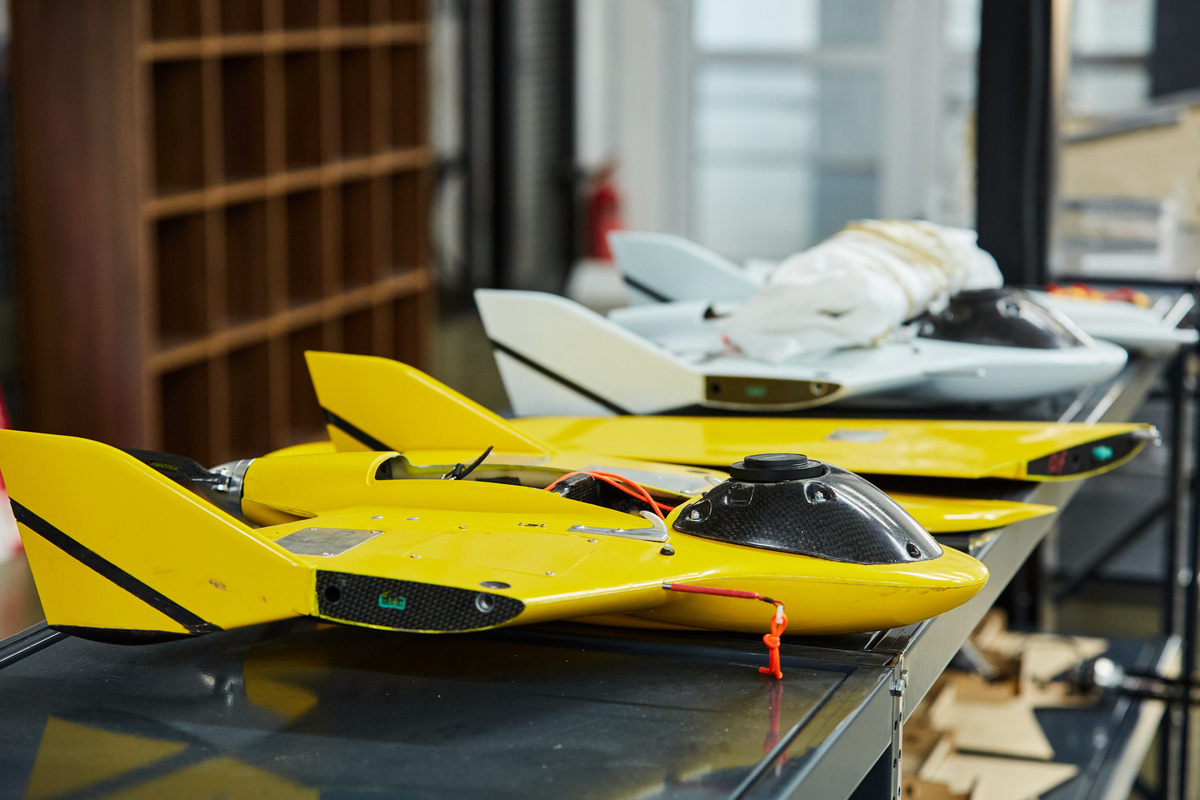 In February 2014, a friend of Oleksandr Danylenko, the to-be CEO of Culver Aviation, came to his office. It was right after the end of the Revolution of Dignity when "little green men" were coming out of “nowhere” in Crimea, and Donbas was rocking by pro-Russian protests. The country was changing before our eyes.

"We were talking about the current situation and new projects. And then a friend told me about his hobby - aircraft modeling. He boasted that he was able to assemble a "plane" that flies according to coordinates and transmits a video stream. He wanted to support the army with it. And it got me interested," Danylenko recalls.

At that time, Oleksandr was managing a small system integration business. He graduated from the radio engineering faculty and was fascinated by robotics while construction remained his life-long hobby. Together with this friend, Danylenko went to the field to test a self-made drone. "And then it all started," he says. 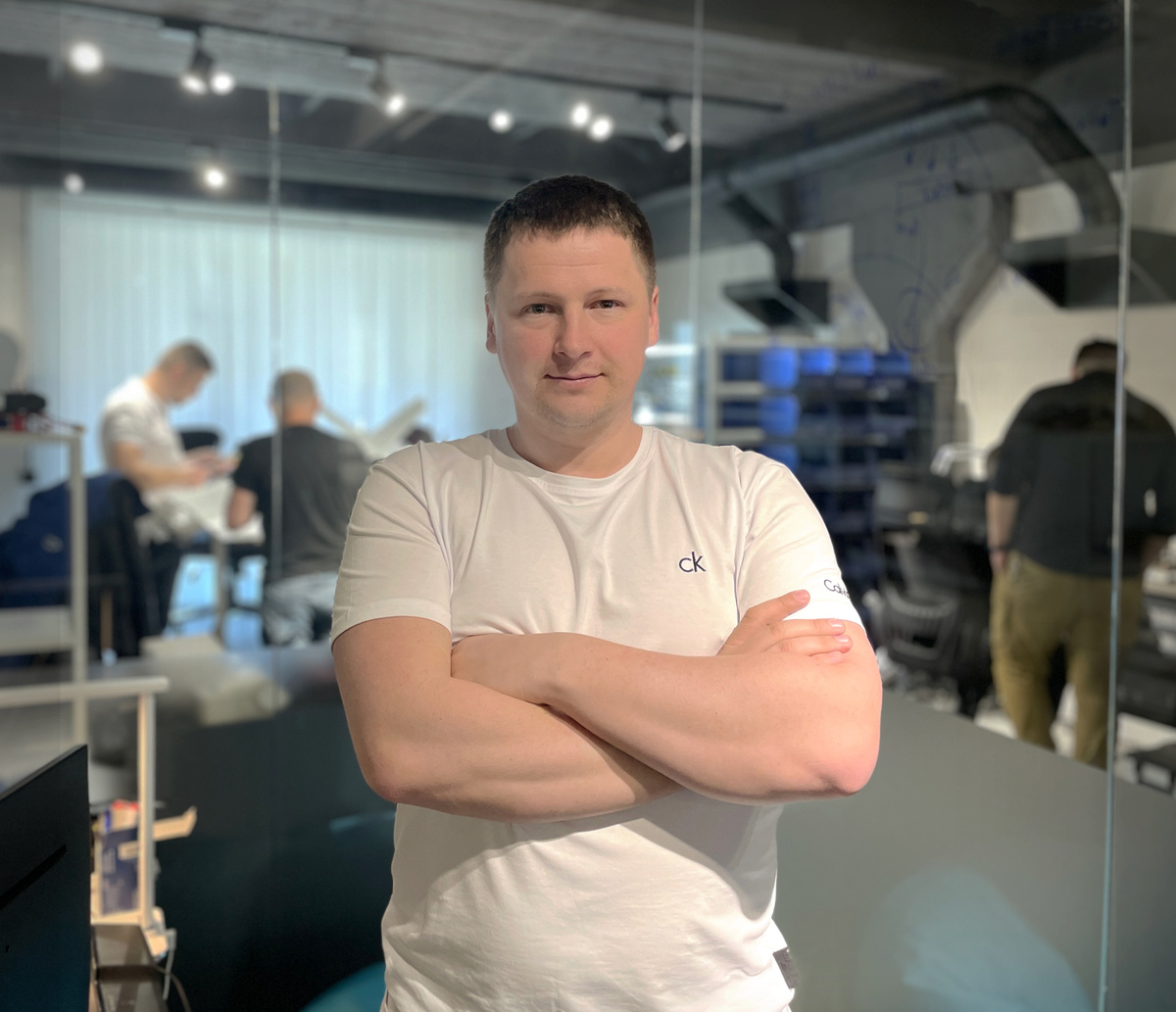 Not long after, with the beginning of the hybrid Russian aggression in Donbas, friends created the EyeTech volunteer group in Kyiv. Oleksandr Danylenko and his colleagues focused on creating a reconnaissance unmanned aerial vehicle to perform on the frontline.

The group assembled the first examples in the garage with their funds.

"These were not similar models. We bought foam Chinese airplanes and cut and glued them. Everybody was doing so back then. Each time it was getting better, and in the end, the live experience paid off all the expenses," says Danylenko.

That's how colleagues got their hands full. Ground control stations with antennas were made for airplanes.

Unmanned aerial vehicles were tested in the fields around the capital, and were also taken to military training grounds. In addition to EyeTech, the first wave included dozens of Ukrainian developments. But the Ministry of Defense included the Patriot UAV (that's how the volunteer group named its model) in the top five drones for controlled operation.

Here is a of exactly what tasks Culver Aviation drones perform.

In December 2014, the group turned into a research and production enterprise ITEC. It began to participate in large exhibitions, which were visited by high-ranking government officials. Even (ex)President Poroshenko mentioned Patriot in one of the interviews. In parallel, ITEC made air reconnaissance complexes ordered by volunteers and continued to improve their devices.

In 2015, the company began to fully design the carrier. The company was helped by the aerodynamics specialist, who underwent the ATO. Today he designs aircraft for Culver Aviation. And thanks to gratitude and feedback from the front, the team developed the necessary features: installed a high-precision camera, a thermal imager, a battery that provides up to two hours of autonomous flight, etc. 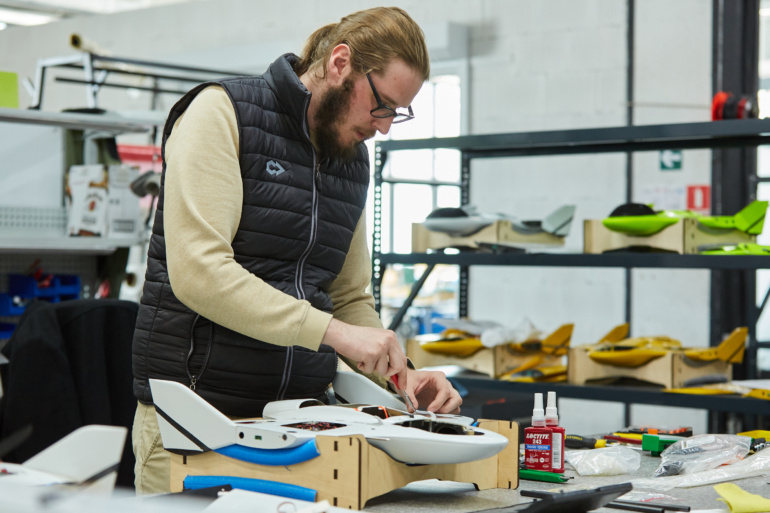 Since 2016, it has become possible to make composite cases with Kevlar, fiberglass, and carbon. Aerodynamics calculated on a computer made it easy to reproduce in the physical world.

"In 2014-2016, we managed to make several dozen air reconnaissance complexes for the military. And I still keep certificates, acknowledgments, and the Ukrainian flag signed by the soldiers since then," Oleksandr Danylenko says.

From the front - to the fields

In mid-2016, the team began to look for ways to monetize their solution. Orders from volunteers were enough to support the business, but not to grow. And the signing of the contract with the Ministry of Defense was hindered by the state bureaucracy. The company decided to change the direction of the product.

At that time, business and government institutions had already formed a demand for land surface surveying and data processing. The Patriot drone was adapted for such demands: we kept the same body, engine, and battery, and removed the thermal imager and video camera. This is how SKIF - the civilian version of the military "bird" - came to life. 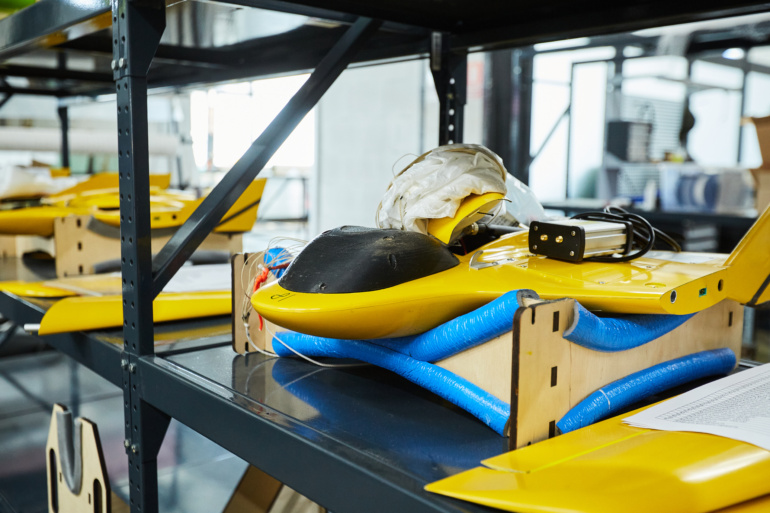 Some of its features are:

The top client in Ukraine is the agricultural sector, which needs to constantly monitor changes in the fields.

"Before the season, farmers should receive accurate contours of plots to calculate the sowing budget and not leave unprocessed places. And then to monitor the crops to prevent plant diseases in time and not delay the harvest," Oleksandr Danylenko explains.

Initially, the company was selling aircraft and training agricultural holding employees to operate them and process data. This was giving customers unnecessary work. After some time, the business model was changed to Drone-as-a-Service. The team figures out the task, moves to the location, performs geodetic and aerial work, processes the data, and produces a result that can be used in business decisions.

It’s not just about crops though. From the air, you can monitor the forest resources, roads, pipelines, and high-rise buildings and assess the consequences of natural disasters. For example, nowadays SKIFs are involved in assessing the destruction caused by the Russian invasion.

In 2021, the ITEC company entered the TECHIIA holding and changed its name to Culver Aviation. The team grew to several dozen people. The SKIF unmanned complex went on serial production: designing the fuselage and electronics, manufacturing cases and boards, assembling, and programming. In addition to services, the company is developing an innovation that will be revealed at the leading international exhibition of commercial UAVs this September.

Culver Aviation reacted to the Russian invasion in no time.

From the first days, a large part of the pilot team went to defend the country and joined the Armed Forces. The production was moved to the western part of the country, the SKIF production pace was maintained to provide the services on time. For social support, a free drone operator school was opened, which has already trained 70 people. 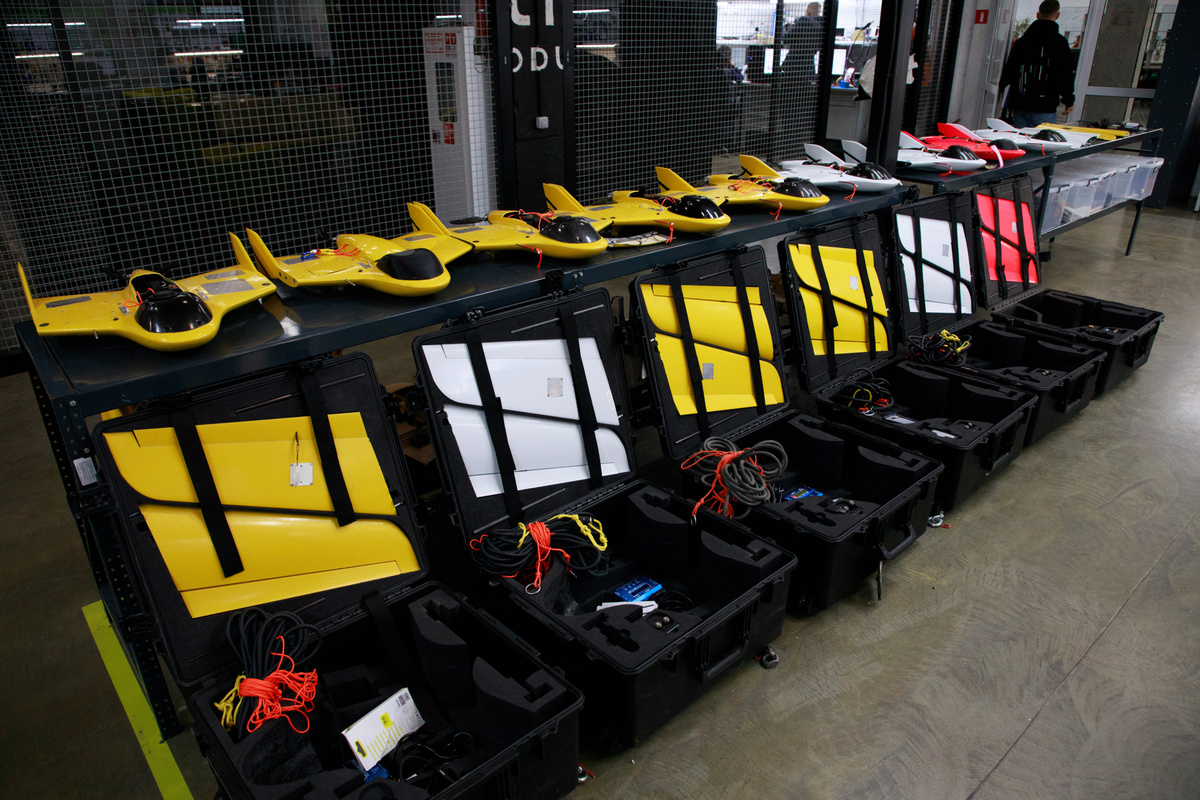 Work continues. "We are waiting for the state's permission to resume commercial flights - this is a matter of economy and food security. We are also preparing to release a new product that will change the perception of what drone services are," says Oleksandr Danylenko.